Series of crashes snarl traffic on I-15 Sunday, UHP motorcycle among 9 vehicles involved

BOX ELDER COUNTY, Utah – Northbound I-15 was closed near Willard Bay in Box Elder County Sunday afternoon following a series of crashes involving several vehicles, including the motorcycle of a Utah Highway Patrol trooper who stopped to help at the scene of the initial crash.

According to updated information from the Utah Highway Patrol, Trooper J. Zilles was dispatched to the scene of a single-vehicle crash near mile post 356 around 1:30 p.m. after a Hyundai Elantra crashed into the median cable barrier. Zilles parked his motorcycle behind the vehicle, and a second UHP trooper parked  patrol car a short distance behind the crash to warn approaching traffic.

At about 1:59 p.m., a Honda Odyssey slowed as it came to the crash scene and was struck by a Volvo passenger car that was following too closely. The Honda veered left after being hit, and it struck the rear of the Hyundai from the original crash. The Volvo came to rest in the left lane of NB I-15.

At 2:02 p.m., a Dodge pickup with a small trailer hauling two four-wheeler ATVs failed to slow and stop appropriately for the previous crashes, and the truck veered into the median and struck Zilles' motorcycle and then the cable barrier. The truck rode along the barrier until it hit the Elantra from the original crash. Initial reports indicated that a semitrailer had struck a police car as part of the sequence of crashes Sunday, but updated information indicated the truck with the trailer had struck the trooper's motorcycle.

Zilles and the drivers of the other vehicles were outside of the cars and talking when the motorcycle was hit, and they were able to move out of the way when the truck and trailer came toward them. There were no injuries at that time, according to UHP.

Zilles said he was standing right next to his bike just a few minutes before it was hit.

“It kind of clicked with me because that was the side I was standing on while I was typing my report prior to the third crash,” Zilles said.

FOX 13 asked him what would of happened if the crash occurred while he was next to or on the motorcycle.

“I have no idea; I probably wouldn't be here right now,” Zilles said.

At about 2:30 p.m., another crash on I-15 near mile post 354 occurred as vehicles slowed due to the previous crashes. Two passenger vehicles, a Ford Focus and a Hyundai Sonata, had stopped in traffic when a semitrailer coming up behind them was unable to stop in time and ran into the back of both vehicles.

The driver of the Ford hit her head on a steering wheel and suffered minor injuries. All occupants were wearing seat belts and were medically cleared to leave the scene.

At 2:44 p.m., a single vehicle crash occurred on northbound I-15 near milepost 353, and the driver stated he saw the slowdown caused by the prior crashes but was unable to brake appropriately. The vehicle went into the median and struck the cable barrier and guardrail.

I-15 was closed at exit 351, and traffic was diverted onto SR-89 as troopers worked to clear the crash involving the semitrailer. All lanes were reopen by 4 p.m. 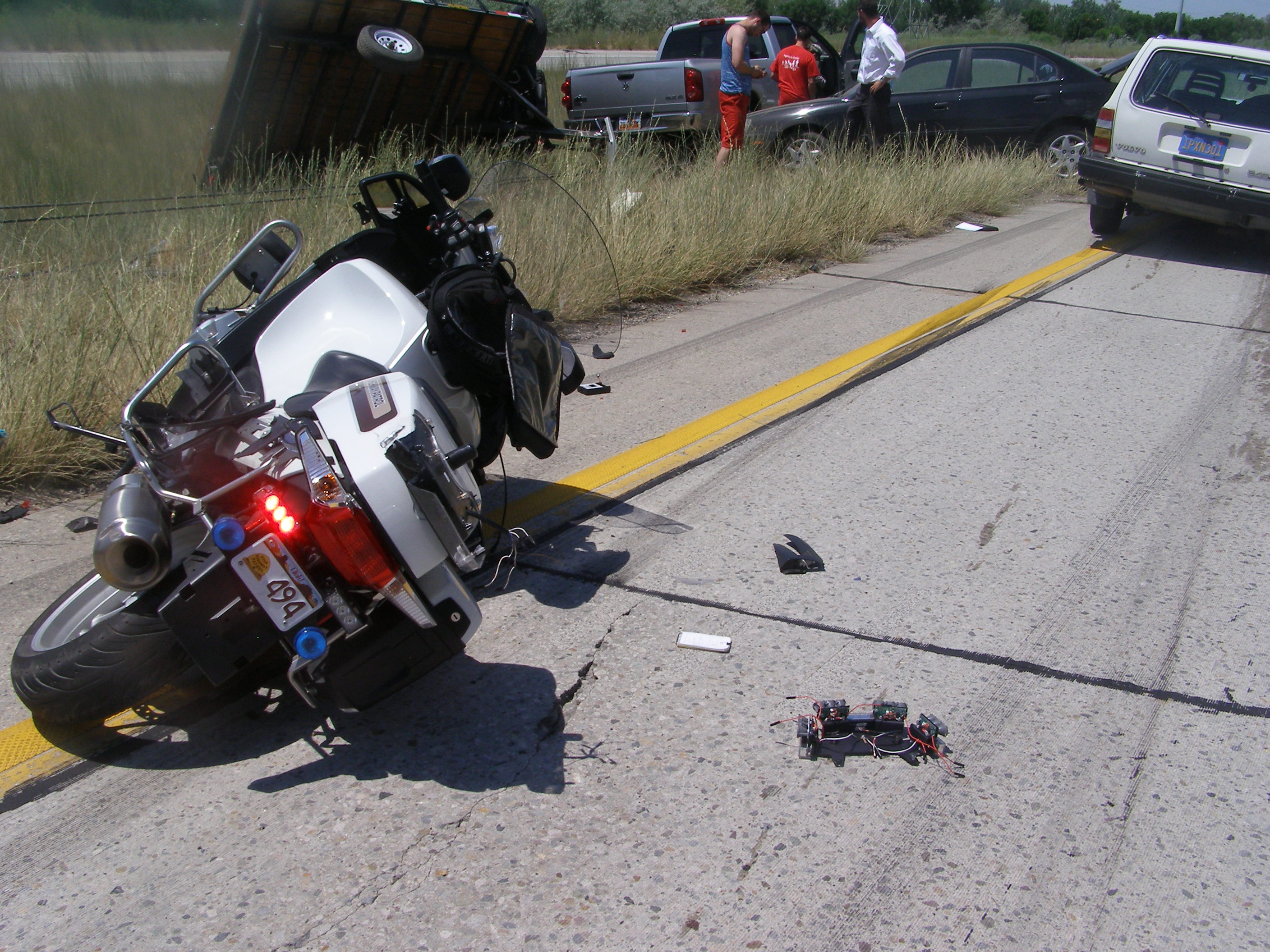