Portrait of Pope Benedict XVI made of condoms sparks debate 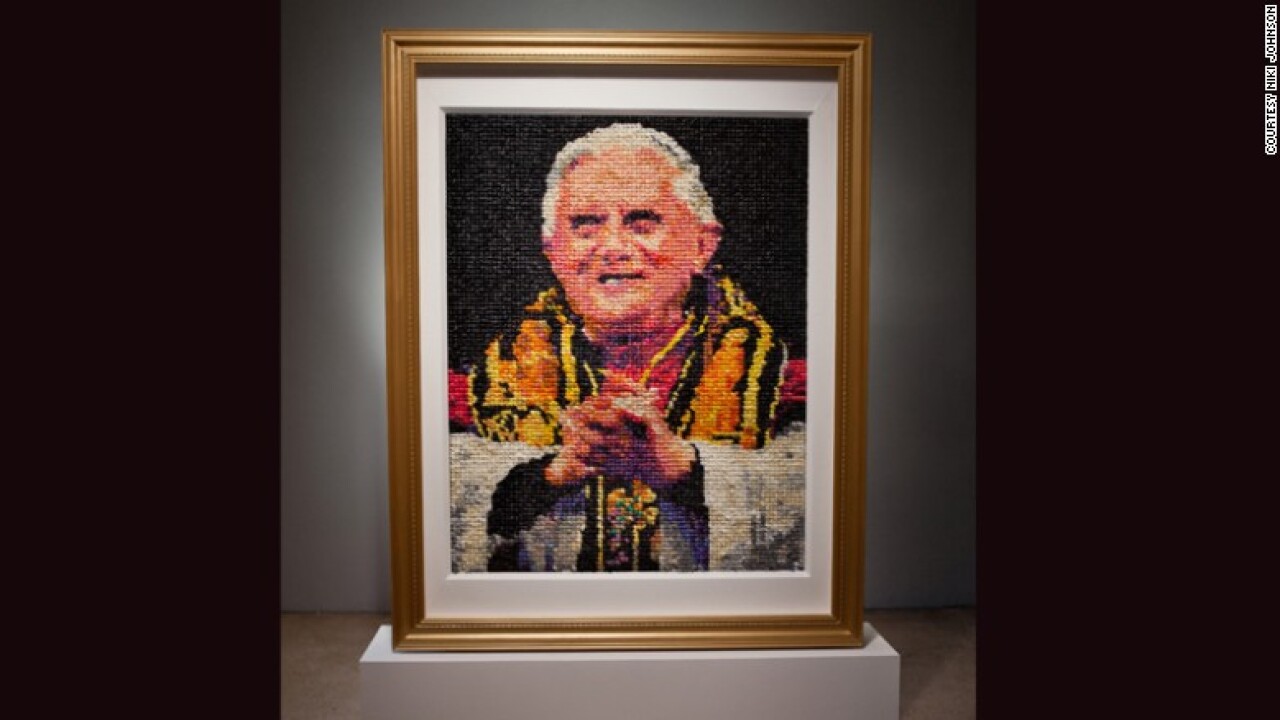 Catholic leaders are criticizing the Milwaukee Art Museum’s decision to display “Eggs Benedict,” a portrait of Benedict made by weaving the condoms through a mesh grating. The artwork by Niki Johnson will go on display in November and has ignited a debate about religious doctrine — the Catholic Church opposes contraceptives — and freedom of expression.

Jerome Listecki, archbishop of Milwaukee, complained in his weekly newsletter that the portrait relies on the notion of “radical individualism” exercised without license.

“We have lost the sense of sacred and in so doing, everything becomes profane and is subjected to our own individual appreciation,” he wrote.

“An artist who claims his or her work is some great social commentary and a museum that accepts it … (and) insults a religious leader of a church whose charitable outreach through its missionaries and ministers has eased the pain of those who suffer throughout the world, must understand the rejection of this local action by the believers who themselves have been insulted.”

Critics have questioned whether the museum would display a similar piece that Muslims or Jews would find offensive.

Museum Director Dan Keegan said he has received complaints from about a dozen members, although the majority oppose censorship of artistic expression and are interested in seeing the artwork.

“Our hope is that the piece will bring not only controversy, but room for conversation — about the underlying discussion the artist intended as well as regarding the role of art in public discussion,” Keegan said in an email.

A spokeswoman said the Milwaukee museum has sold a record a number of memberships in recent days.

Johnson, the artist, told CNN she was inspired to create the piece after the Pope’s 2009 visit to Africa, in which he refused to lift the church’s ban on contraception. He even suggested that condoms could worsen the spread of HIV.

“It seemed only fitting that the material he was resisting would be the material his portrait would be made of,” Johnson said. “I made it with the intention of it to be a beautiful object.”

Johnson said she believes her artwork is prompting constructive discussions.

“The sort of debate that’s happening here is intelligent, it’s heartfelt,” she said.

It’s not the first time that controversy has erupted over high-profile art that some consider sacrilegious.

The National Endowment for the Arts came under fire in the late 1980s after it funded such works as Andres Serrano’s “Piss Christ,” a photograph of a crucifix submerged in a glass of the artist’s urine. Conservative lawmakers responded by slashing NEA funding while Serrano received death threats.

Catholic leaders condemned the show after opened in 1999, and New York Mayor Rudy Giuliani threatened to pull the city’s funding for the museum.

The portrait of Benedict sits in a glass case that measures nearly 7 feet tall, 5 feet across and 14 inches deep. The sheer size catches the eye, but it’s mix of subject and medium that have sparked debate.

Johnson said her decision to illustrate Pope Benedict with condoms was designed to normalize conversations about safe sex. She also said the resulting attention has helped her further her advocacy in this field.

Johnson recently returned from Memphis, Tennessee, where she curated Preservatif, an exhibition of condom-based artwork by 20 artists from around the country. It opened Saturday, on National HIV Testing Day.

She said she’s interested by how people react to her artwork.

“It’s fascinating how people can create conversation and dialogue,” she said.