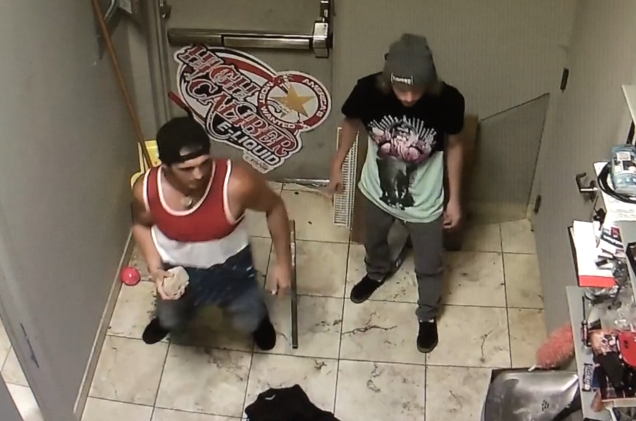 SOUTH JORDAN, Utah – An employee of The Smoke Shop in South Jordan is recovering after being hit in the face with a rock, and police have one of three suspects in custody and have identified another.

Witnesses told police three men came into the shop near 10th W. and South Jordan Parkway Monday afternoon and took the employee to the back of the store.

One of the men is accused of using a rock to hit the employee several times, giving him multiple fractures to his face and jaw which required surgery.

Later Thursday, police arrested 20-year-old Cole Covington of Utah County and booked him into the Salt Lake County Adult Detention Center for charges of aggravated assault. Covington is the male pictured above who has blonde hair and was wearing a beanie with white stripes.

The male in the red, white and blue tank top is being identified as Gage King, according to a press release from the  South Jordan Police Department. While the suspect has been identified, police said his whereabouts are unknown. The third suspect has not yet been identified.

South Jordan officers are warning the men are violent and would like to speak with anyone who has information in this case at (801) 840-4000 referencing case 15F009109.