Recall Alert: Tuna recalled after 62 people in 11 states get Salmonella 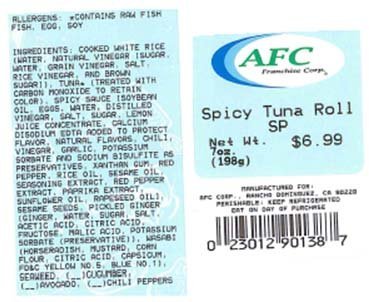 Sushi made with frozen raw tuna is linked to 62 cases of Salmonella in 11 states, according to the Centers for Disease Control and Prevention.

Most of the people who got sick reported eating raw tuna in sushi within the week before their symptoms began.

Eleven people have been hospitalized. No deaths have been reported.

Osamu Corporation recalled all of its frozen tuna from one processing plant in Indonesia due to Salmonella contamination foudn at one Minnesota retail location. The tuna was sold in bulk packaging to distributors who further sold it to sushi restaurants and grocery stores.

In late May, the CDC reported 53 Salmonella cases in nine states.

As a result of this outbreak, the Osamu Corporation has issued two recalls of tuna processed in its Indonesian plant.

One includes all frozen tuna sold to restaurants and grocery stores across the United States between May 9 and July 9. These can be identified by their purchase order numbers, 8563 through 8599.

Osamu is also recalling one lot of frozen yellowfin tuna chunk meat distributed to AFC Corp. for use in sushi franchises throughout the United States from May 20 to May 26 with the lot number 68568.

The recalled products should not be sold or served.

Osamu Corporation recalled Frozen Yellow Fin Tuna Chunk Meat sold to AFC Corporation after meat sourced to an Indonesian processing plant was contaminated with Salmonella. There have been two reported illnesses to date associated with exposure to the sushi in Minnesota.

The dates of illness caused by Salmonella Paratyphi B variant range from March 5 to July 7. More cases may have occurred since the last tally on July 19 because people may delay reporting the illness two to four weeks after falling ill.

The youngest person reported sick is under 1 and the oldest is 83, the CDC said. The most vulnerable people — who are very young or very old or who have compromised immune systems — should avoid raw fish or shellfish, the CDC says.

Symptoms include diarrhea, fever and abdominal cramps that occur 12-72 hours after exposure.

The CDC and FDA have been working with state and local health departments to investigate this outbreak since it was announced May 21.