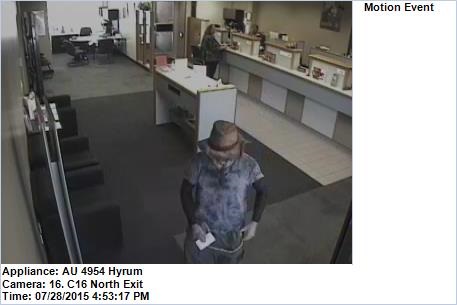 HYRUM, Utah — A bank robbery in Hyrum Tuesday resulted in several evacuations in the area due to a threat of an explosive device.

Cache County Sheriff’s Office deputies responded to a hold-up alarm at a Wells Fargo Bank, 10 E. Main Street at about 5:50 p.m. Initial investigation showed one male entered the bank and demanded money from the tellers. The suspect commented that he had an explosive device, according to a press release from the sheriff’s office.

Deputies evacuated bank employees as well as people from nearby businesses and the Hyrum City library. Members from the Cache County Bomb Squad responded to the scene. No suspicious packages or devices were located in the area, the release states.

The suspect is described as a white male in his early 30s about 5 feet 5 inches tall. He is described to have long brown hair and a long handle-bar style mustache.

He was last seen wearing a long-sleeve shirt, cargo style shorts and a wide brimmed hat and glasses.

Anyone with information regarding on the incident or the suspect is asked to call Cache County Sheriff’s Office at 435-755-1000 or Logan City Dispatch Center at 435-753-7555.