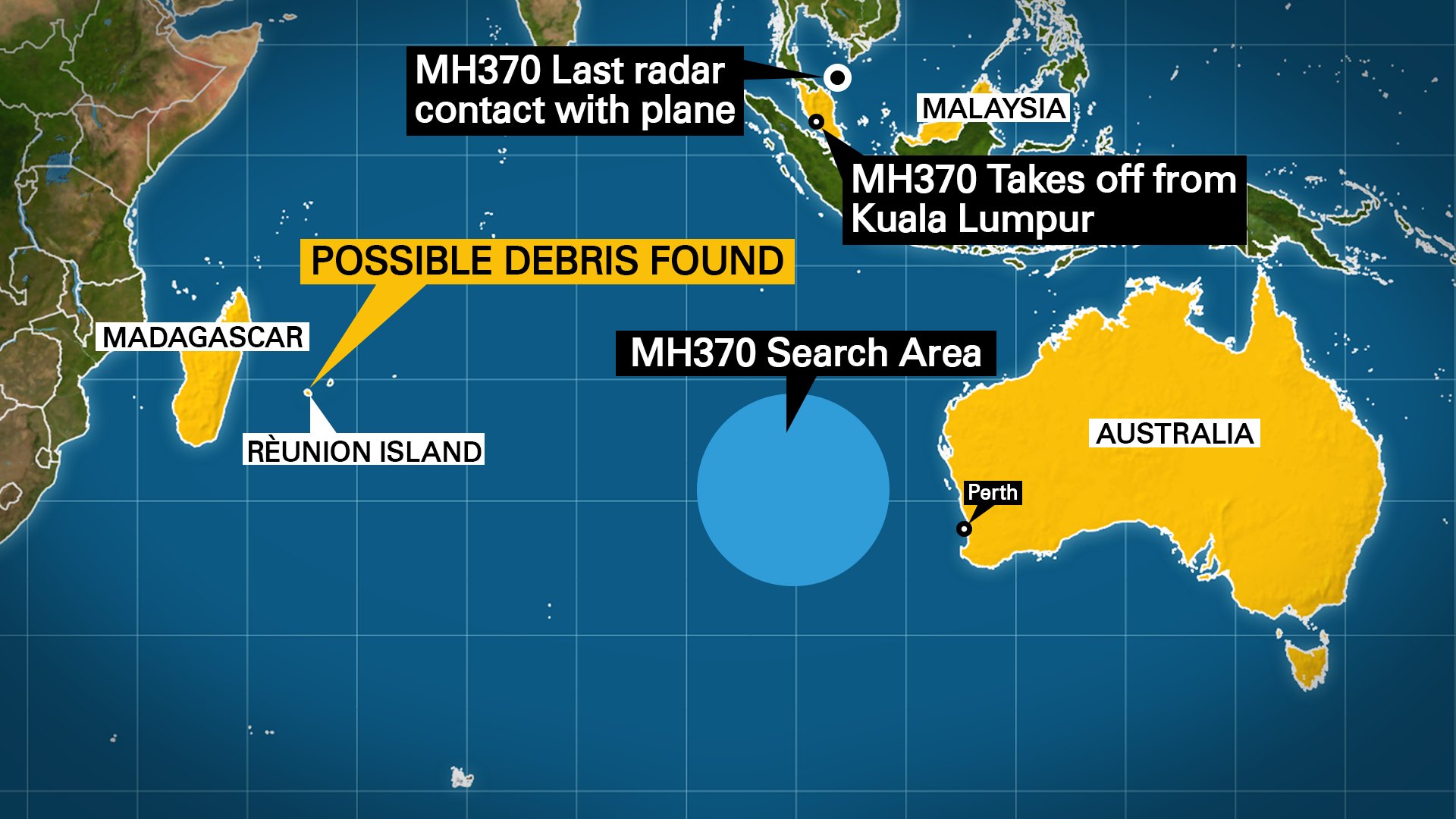 (CNN) — Debris found in the western Indian Ocean on Wednesday appears to be part of a Boeing 777, the same model as Malaysia Airlines Flight 370 that disappeared in 2014, according to a source close to the investigation.

The source said there is a unique element to the Boeing 777’s flaperon, a wing component, that Boeing observers believe they are seeing in photos.

The debris was found Wednesday off the coast of Reunion Island, a French department in the western Indian Ocean. It is being examined to see if it is connected to flight MH370, a member of the French air force in Reunion said Wednesday.

The debris was found off the coast of St. Andre, a community on the island, according to Adjutant Christian Retournat.

Officials conducted an initial assessment of the debris using photographs.

The source stressed the observations are preliminary.

K.S. Narendran, whose wife was on the plane, said he was reticent to call the discovery a major development.

“I think this is very early days yet. All we know is that a small part has been found. It is still a little early to suggest it does belong to MH370,” he told CNN’s “Erin Burnett OutFront” from India. “I think it is premature to feel that it is all coming to a close or that we are even closer to the truth.”

Sarah Bajc, whose partner, Philip Wood, was on MH370, said her “heart has been in my throat for most of the day.”

During the initial days of the search for the plane, there were several reports of possible debris sightings in the waters closer to where authorities believe the plane went down, but none of those was actual wreckage. Bajc said as an emotional safety mechanism she disbelieves any reports like Wednesday’s discovery.

“If ultimately this is the piece of the wing, then that little thread of hope that I have been holding on to will, will have to break. And reality will have to take over,” she said holding back tears. “But, yeah, up until now, I and most of the family members have continued to believe that until we have a body … we can’t give up hoping they will still come back.”

If this turns out to be a piece of MH370, it would be the first piece of evidence that the plane crashed.

Earlier, Retournat said the debris appeared to be a wing flap and had been taken to the island, about 380 nautical miles off the coast of Madagascar.

The Malaysian government has dispatched a team to Reunion Island to investigate the debris, Malaysian Minister of Transportation Liow Tiong Lai said in New York.

“We need to verify. We have wreckage found that needs to be further verified before we can further confirm if it belongs to MH370. So we have dispatched a team to investigate on these issues and we hope that we can identify it as soon as possible,” the minister said.

Malaysia Airlines said it was working with authorities to determine where the part came from.

“At the moment, it would be too premature for the airline to speculate on the origin of the flaperon,” the carrier said.

CNN analysts said there are indications the airplane part could be from a Boeing 777, and if that’s the case, it’s likely from MH370.

Making the determination should be “very simple” because the serial numbers riveted to numerous parts of the plane can be linked to not only the plane’s model, but also the exact aircraft, said CNN aviation analyst Les Abend, who flew 777s during his 30 years as a pilot.

This means crash investigators may be able to figure it out from photographs of the part — which could be an aileron, a flap or a flaperon — even before arriving on the island, he said.

There are at least three elements of the discovery that are consistent with MH370, said CNN safety analyst David Soucie. The first is that the part appears to have been torn off the aircraft.

“This is from a sudden impact, it looks like to me,” Soucie said.

There also is a seal on the top of the part that “is consistent with what I would see on an inside flap on a triple 7,” he said, and the barnacles on the part are consistent with the “parasitic activity” that would take place from being underwater so long.

“If it is a part from a triple 7, we can be fairly confident it is from 370 because there just haven’t been that many triple 7 crashes and there haven’t been any in this area,” said CNN aviation analyst Mary Schiavo.

Antoine Forestier, a journalist on the island where the debris was found, said people who were on shore gardening saw the plane part drifting in the ocean.

Reporters from Antenne Reunion looked at the debris, which Forestier said was about 2 meters by 1 meter (6.5 feet by 3 feet).

Soucie said he believes the number is a part number, though it might be from a subcontractor.

The head of the Australian Transport Safety Bureau, the agency tasked by Malaysia with leading the search for MH370, said the piece of debris is “not inconsistent” with drift modeling done by Australian authorities.

Dolan would not say how likely it was that any debris would move in a westerly direction.

“There’s a range of possibilities,” he said. “It’s not an exact science.” Dolan said surface currents, wind direction and how high an object was floating in the water might all play a role.

Malaysia Airlines Flight 370, with 239 people aboard, disappeared after a late-night take off from Kuala Lumpur, Malaysia, on March 8, 2014, bound for Beijing.

Authorities have said they still don’t know why it turned dramatically off course over the sea between Malaysia and Vietnam, or where exactly its errant journey finished.

The Malaysian government eventually declared the loss of Malaysia Airlines flight 370 an accident and all of its passengers and crew presumed dead.