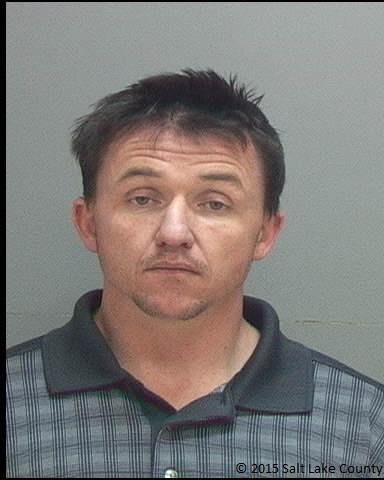 UPDATE: Click here for body camera footage of the chase

Cox, 31, had 13 felony warrants out for his arrest, and, given his history of fleeing from police, officers requested assistance from a Utah Highway Patrol helicopter to help track the man from above.

Cox began fleeing from police around 8:30 p.m., and the chase reached speeds of up to 70 and 80 mph. Police terminated the vehicle pursuit when the man reached SR 201, but continued to follow the man via helicopter.

Police were able to deploy spikes on the suspect vehicle’s tires in the area of 2100 South and Bangerter, but the man kept driving. The vehicle was moving erratically as the tires were gone and the car was riding on its rims.

As Cox continued to flee, he veered his vehicle toward a Unified PD officer who was trying to deploy spikes. Cox hit the officer, who suffered injuries not believed to be life threatening and that may include a broken bone.

Cox continued to flee, and a PIT maneuver was executed around 8:40 p.m. at about 3600 South 2700 West. Cox was arrested and booked into jail, where he faces charges of attempted aggravated murder, felony fleeing and reckless driving, according to the press release.