PROVO CANYON, Utah – A wildfire burning near Deer Creek Reservoir below the dam is suspected to be human caused, officials said.

The Wheeler fire was first reported to the Wasatch County Sheriff’s Office at about 2:40 p.m. Monday.

Undersheriff Jared Rigby said the blaze may have started by an ATV vehicle near Canyon Meadows subdivision, which is west of the reservoir.

The fire has burned about 300 acres so far, coming dangerously close to the Cascade Meadows subdivision. 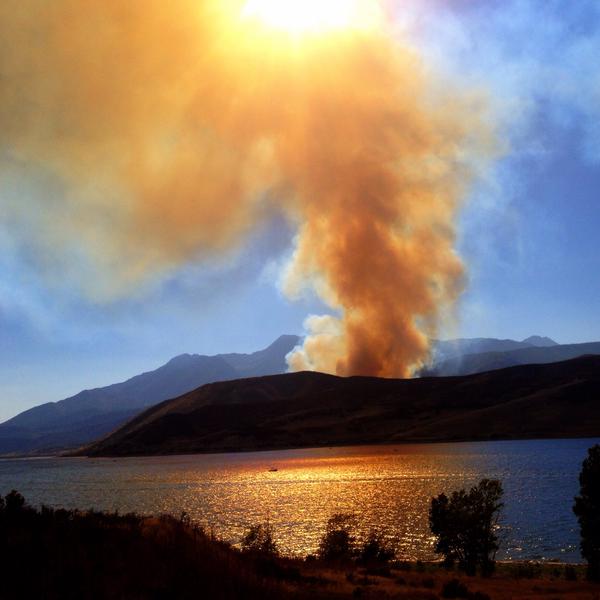 "We put some of our clothes and photos and things like that" said resident Becky Gardner, who packed her car in case of an evacuation.

Gardner's family and their neighbors spent the evening cutting away brush from their properties as a precaution.

All received a visit from local officers, who warned there may be a mandatory evacuation.

"You're just, you know, afraid it might come down and actually come down towards our homes," resident Brent Crabtree said.

By the evening, crews noticed a shift in direction, taking the flames away from the neighborhood.

According to state fire officials, the majority of the concern was for the Cascade Springs recreational area, where approximately 100 people were evacuated earlier in the day.

"We've got a lot of resources on the fire. A couple heavy tankers, a couple single engine tankers," said Mike Eriksson of the Utah Division of Forestry, Fire and State Lands.

"I was surprised by how much ash there was. We were out kayaking and you can see bits floating by, like big pieces," Amy Teemant said, who spent the afternoon at Deer Creek Reservoir.

Wildfire just over the hill. Lights up the water making the waves look like flames.

Bunch of beautiful homes just south of the fire. Hope the fire stays away from them. #utahfire #provocanyonfire pic.twitter.com/9tdw3U2hw1

Listeners tell us Provo Canyon highway is closed in both directions due to a wildfire below Deer Creek Dam.