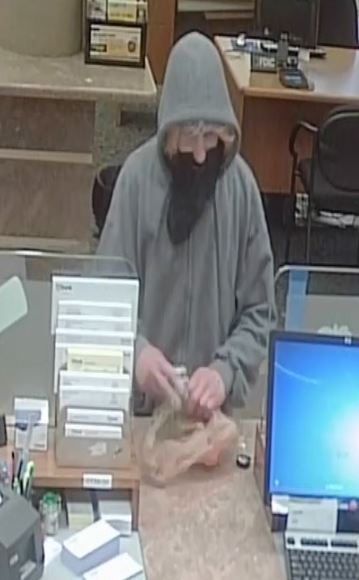 HOLLADAY, Utah — Police have released surveillance images from a bank robbery that occurred Tuesday in the hope the public can help them identify the suspect, who appears to have disguised himself using a blonde wig and a large, false beard.

According to a press release from the Unified Police Department, the robbery occurred around 1:10 p.m. Tuesday when the suspect entered a US Bank at 1998
East Murray Holladay Road, approached a teller and demanded money.

The suspect fled on foot after receiving cash, and responding officers were unable to locate him.

There were no reports of injuries, and the suspect did not display or otherwise indicate he had a weapon.

Police have described the man as being a Caucasian male in his mid ’30s who stands 5-feet 8-inches tall and has a medium build. The suspect was last seen wearing a gray hoodie, a blonde wig and a long, false black beard.

The press release states: “There is very limited suspect information, but one witness described the suspect as looking ‘homeless’ because of his baggy clothing and unkempt appearance.”