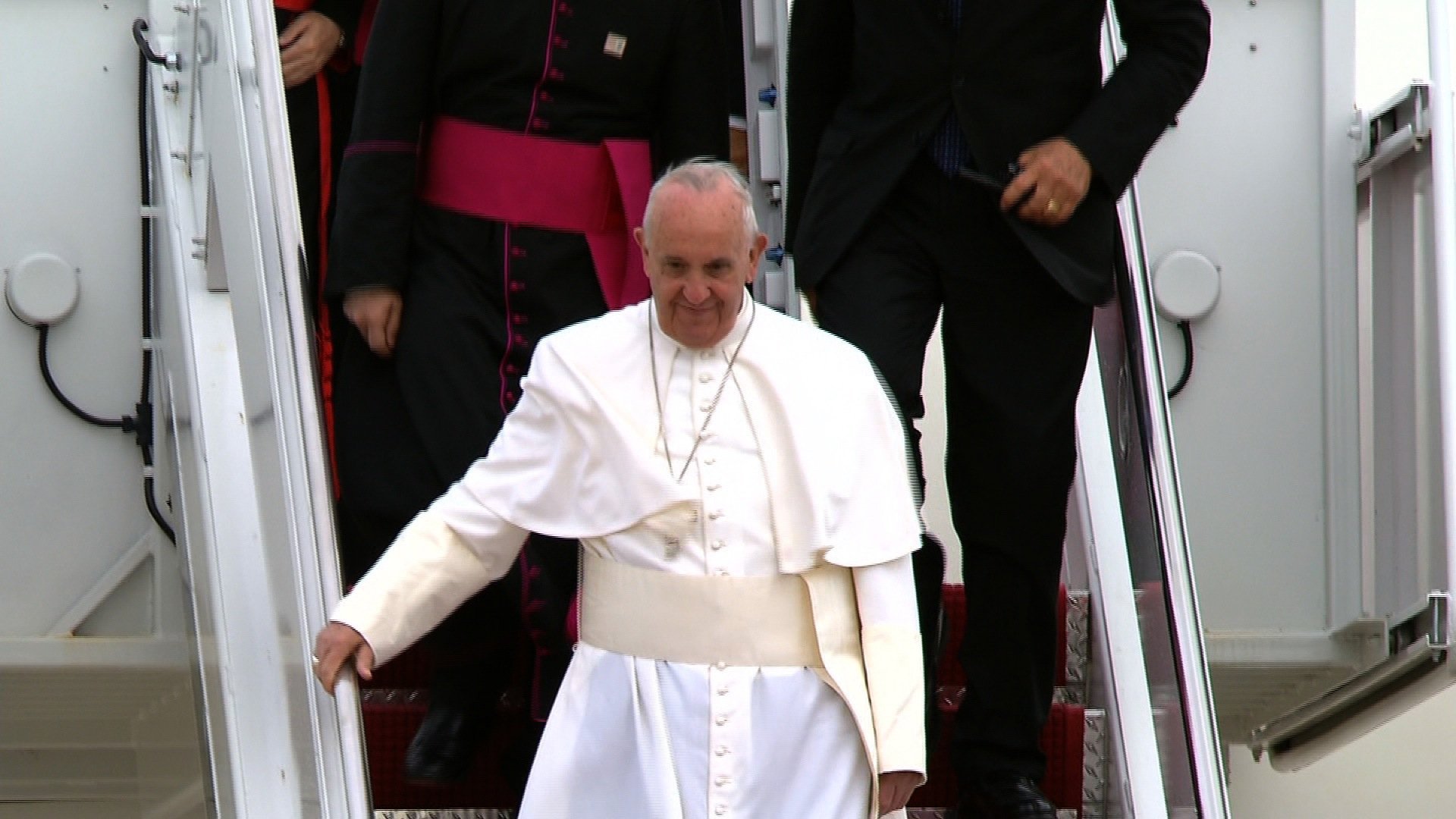 WASHINGTON – Pope Francis landed on U.S. soil for the first time just before 4 p.m. ET on Tuesday, launching a six-day visit that will highlight his love for the poor and his willingness to tackle the nation’s most significant political, social and economic controversies.

In an unprecedented welcome for a foreign dignitary, President Barack Obama, First Lady Michelle Obama and their daughters along with Vice President Joe Biden and his family traveled to Joint Base Andrews outside Washington to greet the pontiff, who arrived from Cuba.

The flags of the United States and the Vatican flapped from the cockpit windows of the pope’s chartered Italian jet as it rolled to a stop near a line of priests in black and red robes and a group of children from local Catholic schools. The Argentine-born pope appeared at the top of the stairs of the plane in a white cassock, smiled and removed his skullcap so it would not be blown away by the wind. Obama greeted him at the foot of the steps with a handshake and a warm smile.

The crowd chanted “Ho Ho, Hey, Hey Hey, Welcome to the U.S.A.” as Francis became the fourth head of the Catholic Church to visit the United States, nearly 50 years after Paul VI made the first visit by a pontiff to the country in October 1965.

On the plane en route to the United States, Francis told reporters, including CNN’s Rosa Flores, that he was happy to make his first U.S. visit. He dismissed suggestions that he was a socialist or a “leftie,” saying that despite his warnings of the inequities in the global economic system, his beliefs were consistent with the established social doctrine of the Church.

After a brief private meeting with Obama in a VIP suite, the pope climbed into a black Fiat hatchback car with the number plate SCV 1, which was much smaller than the limousine foreign visitors normally take in Washington — in keeping with his rejection of much of the pageantry that accompanies the papacy and his desire to live a humble life. After a busy few days in Cuba, Francis has no scheduled events on Tuesday night and will remain at the residence of the Apostolic Nuncio or Vatican ambassador to the United States.

Obama will roll out an official welcoming ceremony for Francis on the South Lawn of the White House on Wednesday. The pope will then parade through downtown Washington in his Popemobile, with thousands of people expected to line the sidewalks. He’ll hold a canonization later in the day at the Basilica of the National Shrine of the Immaculate Conception.

Thursday could be the most politically significant day of his trip, with the first-ever joint address to Congress by a pontiff. He’ll then head to New York, where he will host a religious service at the Ground Zero site of the September 11 attacks in 2001 and address the United Nations. His trip ends Sunday in Philadelphia.

The highly anticipated visit is triggering one of the largest security mobilizations in U.S. history, jointly run by the U.S. Secret Service and the F.B.I. and involving federal, state and city law enforcement. Officials have said, however, that they have not detected any specific terrorist threat to the pope while he is in the United States.

While he is certain of a warm welcome, Francis’ trip will include uncomfortable moments — as is typical of a pontiff who has disrupted the status quo and questioned the morality of modern society.

He is certain to emphasize one of the central themes of his papacy — that the unfettered capitalism practiced in the United States and the West is fostering income inequality and creating an economic culture where the poor are simply discarded.

In a highly symbolic moment, Francis will pass on lunch with lawmakers after addressing Congress and will dine instead with homeless people in Washington.

While he is expected to praise U.S. founding ideals of democracy and freedom, Francis could also wade onto dangerous political ground. He told reporters traveling with him that he would likely not raise the issue of the U.S. embargo on Cuba, which is still in place despite Obama’s lifting of some restrictions on U.S. contacts with the communist island.

Francis’ past calls for migrants to be respected could draw him into the heated debate on illegal immigration that is roiling the 2016 presidential campaign. Warnings by Francis of the need to tackle climate change have angered some Republicans. The Catholic Church’s opposition to same-sex marriage and abortion meanwhile puts him at odds with many Democrats and the Obama administration.

Papal experts say that rather than openly rebuking the U.S. way of life, Francis will seek to persuade America that its great wealth confers special responsibility.

Francis, 78, has never visited the United States before. He will encounter a nation where Catholic church attendance is on the decline, fallout over abuse scandals continues and longtime religious institutions erode amid an increasingly secular way of life.

Still, Catholicism is gaining ground among Hispanic immigrants to the United States — a community for which his calls for humane treatment of migrants are especially significant.

Francis landed in Washington as a new CNN/ORC poll found that nearly half of Americans and 78% of Catholics were looking forward to his visit.

Francis made only veiled criticisms of the regime in Cuba during his stay, perhaps in an attempt to preserve the opening he helped broker between the United States and the communist island after more than half a century of estrangement.

But he did tell Catholics during an open air mass on Monday that religion requires “missionary activity” and service, a subtle nod to the many restrictions his communist host country places on church activity.

The humility with which which Francis has lived his faith is key to his popularity in the United States and around the world and is firing up anticipation for his visit.

“He is my hero. He lives the Gospel in the way I want to live it myself … he tries to make sure that people all feel they are included,” said Monsignor John Enzler, CEO of Washington Catholic Charities, on CNN’s “Wolf.” “When I have a chance to meet him, and frankly just be with him, I am going to be lifted up myself. I am really psyched.”