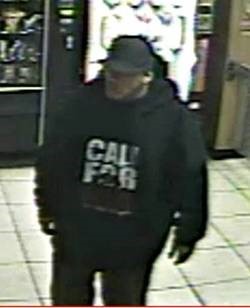 SALT LAKE CITY — Police in Salt Lake City have released surveillance images of the suspect in a strong-arm robbery that occurred at a laundry business September 23, and officers hope the public can help them identify and locate the suspect.

According to information from the Salt Lake City Police Department, the alleged robbery occurred September 23 at about 10:30 p.m. at the Century Cleaning Barn, located at 910 West North Temple in Salt Lake City.

While the clerk was distracted, the suspect allegedly grabbed her from behind and threw her to the floor before taking money from the register and fleeing. The victim told police the assailant, “smelled strongly of alcohol and cigarettes.”

The suspect is pictured above and described in the press release as follows:

Anyone who recognizes the man or who has knowledge of his whereabouts is asked to contact the Salt Lake City Police Department at 801-799-3000. The release states: “Anonymous tips may be sent by text to 274637. Please start your text with TIPSLCPD, which routes it to the police department. Then include any relevant information. Reference: case #15-181762.”