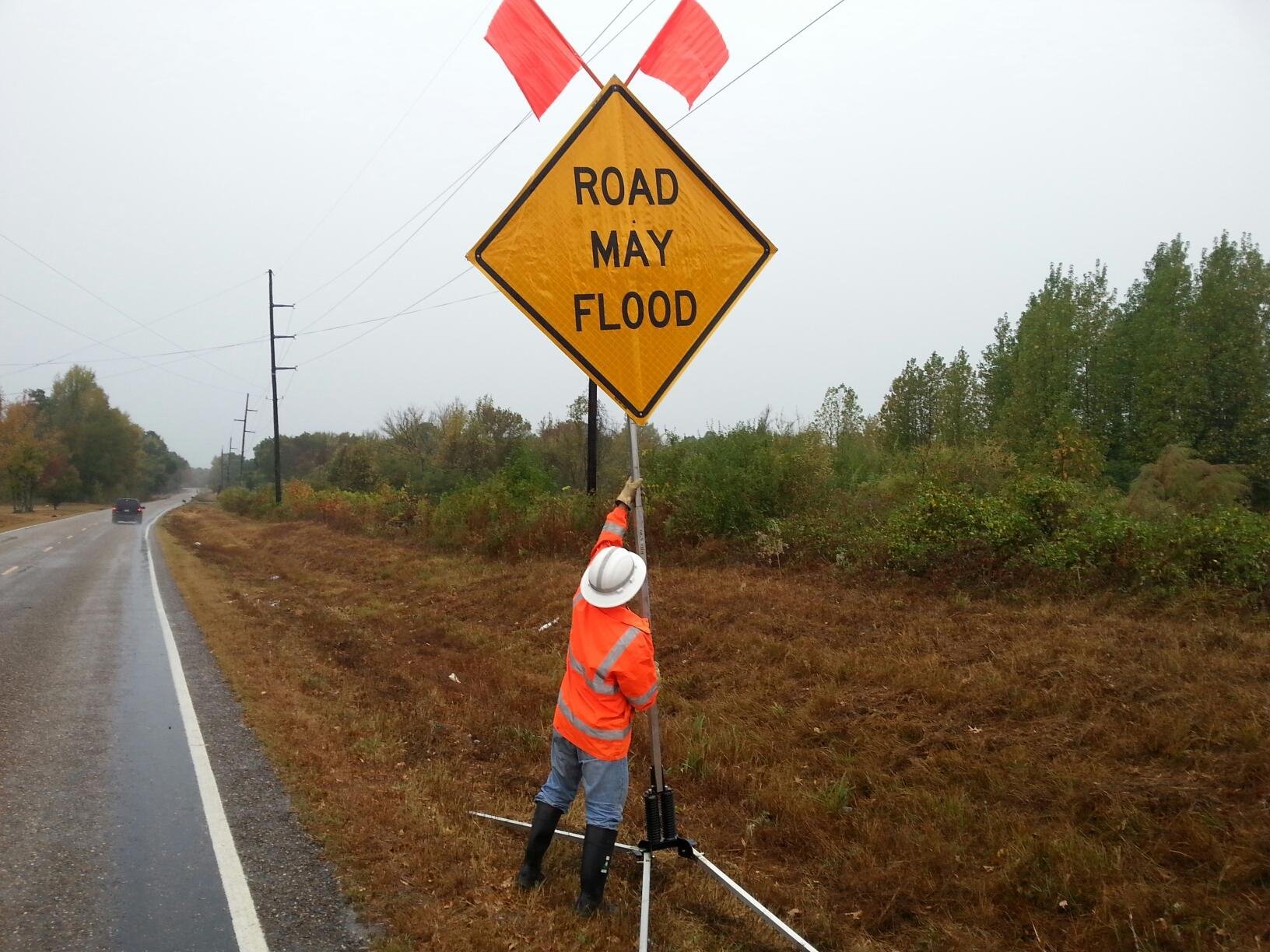 (CNN) — Much of Texas was deluged Saturday by pounding, relentless rains — up to 20 inches, in some locales — causing dangerous flooding that washed away cars, a train and, possibly, one person.

And there’s the possibility of more rain, with the remnants of Hurricane Patricia expected to roll across the state.

A 41-year-old homeless man was missing in San Antonio. He went after his dog near a drainage ditch “and he got swept away” about 4 a.m., fire department spokesman Christian Bove said.

Authorities called off the search a few hours later with no sign of the man, though the dog he’d been chasing was found safe. Bove said a full-scale search will resume when water levels recede.

Rain was letting up in the city by late afternoon after a morning of heavy rain. San Antonio broke a daily rainfall record by 10 a.m., according to the National Weather Service.

Forecasters had warned rain could fall at a rate of 4 inches per hour and swell parts of the San Antonio River around Interstate 410.

A similar story — of rain, rain and more rain — played out across many other parts of Texas.

The emergency office in Navarro County, about 250 miles northeast of San Antonio, noted several reports of a jaw-dropping 20-plus inches of rain Friday into Saturday.

A Union Pacific train with dozens of cars carrying cement derailed in Corsicana, one of Navarro County’s hardest-hit communities, though not before two workers on it managed to stop it, climb out, then swim to high ground, company spokesman Jeff DeGraff told CNN.

“They are in good condition, no injuries, just a little wet and shaken up,” DeGraff said.

The rain in this vicinity caused intermittent closures of Interstate 45 between Dallas and Houston — the latest coming around noon, near Corsicana — not to mention corresponding miles-long traffic jams.

First-responders launched several rescue missions to help people stranded in their vehicles, some of which video showed were all but undetectable under floodwater.

In Fort Worth, Jane Dysart had to be rescued when her car stopped running through water in the street, reported CNN affiliate KTVT.

“The SUVs and all were going through it and the trucks,” she said. “I didn’t.”

In the central Texas town of Temple, authorities rescued a man from a tree, CNN affiliate KWTX reported. He climbed it when he lost control of his car and had to escape the rising water, KWTX said.

It’s not just central Texas that’s been affected. Much of the eastern half of the state, along with parts of southern Oklahoma and southwestern Louisiana, were under flash-flood warnings and watches through the weekend.

As if all the rain now falling isn’t enough — even for a state that’s been dealing with extensive droughts — more could come early next week, compliments of Patricia.

Remnants of Patricia could affect U.S.

Once a Category 5 hurricane, Patricia broke up quickly as it rolled over Mexico late Friday. By 7 a.m. (8 a.m. ET) Saturday, it wasn’t even a hurricane anymore — having become a tropical storm, with expectations that it would “dissipate” by that night, according to the National Hurricane Center.

Still, that doesn’t mean Patricia — or the problems it could cause — is going away.

Forecasters are no longer worried, as they once were, that Patricia may reorganize and strengthen as it barrels over Mexico into the Gulf of Mexico, CNN meteorologist Jennifer Gray said.

But, even if the winds die down, all the moisture from a huge storm system like this one doesn’t just go away in a flicker. Instead, the remnants of Patricia could feed into the existing storm in the United States.

“We’re going to see all this moisture pulling in, and that’s just going to add to (the immense rainfall in Texas),” Gray explained. “That’s why this is going to be a several-day event.”

That other storm system is already huge. Radar shows huge swaths of green, yellow and blue indicating precipitation covering much of Texas on Saturday morning and extending in a line into the Midwest to the northeast, as far up as Ohio.

Houston set to get pummeled next

While big chunks of the state were still dealing with drought, there can be too much of a good thing. This is especially true when roads, dams and waterways can’t handle it.

“All the creeks and rivers upstream here in central Texas, they are filling up,” storm chaser Reed Timmer said from Corsicana. “And there’s a lot more rain on the way.”

Dallas has been in the thick of it, getting about 8 inches of rain in 24 hours as of late Saturday morning. Parts of the rising Trinity River could go above flood stage by evening, city officials said, and a man on nearby White Rock Lake released water to keep up with the flow.

On roadways in and around Austin, heavy rain had prompted the closures of 66 low-water crossings around 7:30 a.m. The city of Austin, via Twitter, urged people to stay inside while noting that “75% of flash flood deaths in (Texas) happen on the road.”

Camp Mabry, a military installation in the state capital, had 2.63 inches of rain before 8 a.m., by which time it had already smashed the daily record set in 1949.

One city where too little water hasn’t been a problem in Houston. It was among the hardest-hit places last May, when heavy rains and flooding killed at least 15 in Texas, plus at least six in Oklahoma.

This year, much of east Texas and all of northern Louisiana, southern Arkansas and west-central Mississippi have suffered through extreme or exceptional drought, the two highest classifications, according to the U.S. Drought Monitor.

Starting Saturday afternoon through Monday, Houstonians can expect 3 to 7 inches — and 8 to 12 inches in some spots — according to the National Weather Service. The highest chance of severe flooding there from rain falls between 9 p.m. Saturday and 7 a.m. Sunday, while elevated tides may also cause flooding along the coast.

At a Saturday press conference, Mayor Annise Parker said the city is not calling for the cancellation of any events, but “It’s a good idea if you don’t have to go out, stay home.”

A voluntary evacuation has been ordered for Bolivar Peninsula in nearby Galveston County, where there are prospects of a foot of rain, tides up to 5 feet above normal and high winds that could knock out power and “hinder transportation to and from the peninsula.”

“The voluntary evacuation order is intended to alert residents of Bolivar Peninsula that emergency responders may be unable to reach them,” Judge Mark Henry said in a Facebook post. “Elderly residents and people with medical conditions should make plans to leave the area before dark.”

Flash-flood warnings for areas around San Antonio and Austin were changed to advisories about midday Saturday.