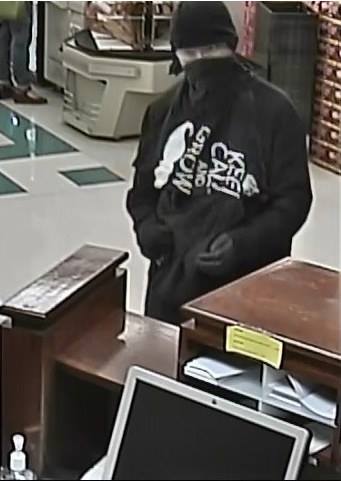 WEST VALLEY CITY, Utah — Police in West Valley City are asking the public for help identifying a man suspected in a bank robbery at a bank branch located inside a grocery store, and officers stated, “They say the eyes are the window to the soul, and we’re hoping that this guy’s eyes are enough to identify him.”

West Valley City PD released two photos of the suspect, wearing a mask and hat to disguise his features, who allegedly robbed the US Bank inside a Smith’s Grocery Store on 4100 South and 5620 West Tuesday.

Police stated the suspect appears to be a white male who stands 6-feet, 2-inches tall with a medium build. He may have tattoos on his neck, and he had a “distinctive” shirt or flag tied around his face bearing the slogan: “Keep Calm and Grow a Mustache.”

Anyone who recognizes the man or who has knowledge of the alleged robbery is asked to contact West Valley City PD at 801-840-4000.