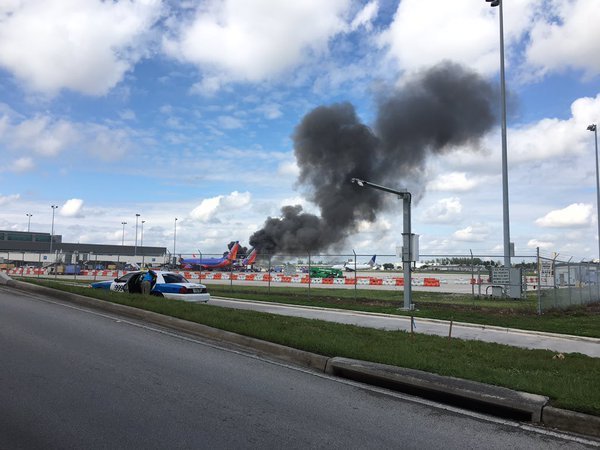 (CNN) — The engine of a Boeing 767 carrying 101 people caught fire as the plane taxied for departure Thursday at Fort Lauderdale-Hollywood International Airport in Florida, officials said. It was bound for Caracas, Venezuela.

The pilot of an aircraft traveling behind Dynamic International Airways Flight 405 reported fuel was leaking from the aircraft before it caught fire, a Federal Aviation Administration official said. The fire occurred about 12:30 p.m. on the airport’s north runway.

Passengers evacuated the jet via emergency slides onto the taxiway. Emergency officials responded in two minutes, and the plane was evacuated within six minutes, Jachles said.

The airport was closed as emergency officials responded. It reopened shortly after 3 p.m., but airport spokesman Greg Meyer told reporters that the airport wouldn’t operate at 100% until the north runway could be reopened.

He pointed out that firefighters still had their nozzles aimed at the jet in case it flared up again.

“It’s still going to be hot,” Meyer said, adding that the runway couldn’t be opened until fire and rescue crews cleared the taxiway and the runway was inspected for damage and debris.

As of late Thursday afternoon, there had been 111 delays and 47 cancellations out of or into the Fort Lauderdale airport, according to FlightAware, which does not provide information on the reasons for cancellations and delays.

Audio from the air traffic control tower caught one of the pilots saying, “The left engine looks like it’s leaking a lot of fuel. There is fluid leaking out of the left engine.”

Images and video from passengers who were at the airport or on other planes showed plumes of dark gray smoke billowing from the red-and-white jet.

An ambulance, fire truck and other emergency vehicles were on the scene in one of those photos, while another witness posted video of emergency responders dousing the plane with hoses.

Doctors were treating 13 patients, including one child and one trauma patient, according to Amy Erez of the Broward Health Medical Center. Footage from local media showed a woman on a gurney, her ankle wrapped in what appeared to be an ice pack, being wheeled into the hospital.

Two calls to Dynamic International Airways’ headquarters in Greensboro, North Carolina, were both met with “no comment” on the fire. The airline serves new York, Fort Lauderdale, Venezuela and Guyana, according to its website, and an email from the company says the airline flies to Orlando, Brazil, Hong Kong and Palau.

In a series of Spanish tweets replying to those concerned about the fire, Dynamic said there was “a failure in one of the engines.” All passengers were safely evacuated, the airline tweeted, promising an official statement “soon.

That statement said that the crew “shut down the engine and evacuated the aircraft” after learning of an engine problem. Dynamic said it was investigating the matter and was working to make arrangements for passengers affected by the flight disruption. It plans to operate per its normal schedule beginning Friday, the statement said.

The National Transportation Safety Board is sending a four-person team to Fort Lauderdale to investigate the fire, the agency tweeted. Boeing announced later it will provide technical assistance during the investigation.

According to an FAA database, the plane was built in 1986.