Fight over Confederate flag decal could be investigated as hate crime, police say

WARNING: Video above may be violent for some viewers. Watch with discretion.

Cell phone video captured an African American man throw a punch at a Caucasian man, knocking him out.

The fight was over an argument about a Confederate flag decal on a truck parked at the Red Lion Hotel.

The truck belonged to Kelly Leeper’s friend. Leeper was in town for the Garth Brooks concert.

On Sunday, he said looked out the window of his room at the Red Lion and saw a group of African American men near his friend’s truck.

In the back of the truck, Leeper said there was $50,000 worth of welding equipment.

There was also a Confederate flag decal on the side.

"The point is it's my right to drive what any kind of vehicle I want," Leeper said. "If I want to fly the Confederate flag, it's my right."

Leeper went to the parking lot with his friend and confronted the group. That’s when the fight turned violent.

In one fast and powerful punch, Leeper’s friend was knocked out.

A scuffle ensued and Leeper was taken down by a group of six men.

"I'll be damned if I ever come to Salt Lake again without bringing my gun," Leeper said.

The fight was captured on cell phone video which has been turned over to Salt Lake City Police.

Someone at the scene also got a partial plate number of the suspects' vehicle.

"Somebody thought to get a plate number as well and that's really going to help in this case," Salt Lake Police Sgt. Robin Heiden said. "I think we'll probably be able to track down that vehicle.”

It is only a partial plate number and it comes from a temporary Utah license tag.

The car is described as a silver two-door car with the partial plate 9-7-S-20.

Leeper said the fight turned racial with slurs going both ways by the time it was over.

"It could potentially be a hate crime," Heiden said. "We'll then present all that to the district attorney who will make that final determination."

Both Leeper and his friend suffered cuts and bruises but neither were seriously hurt.

Salt Lake City officers are asking for help identifying the men in the video and locating the car involved.

WARNING: Photos below contain graphic images of the man injured in the fight. 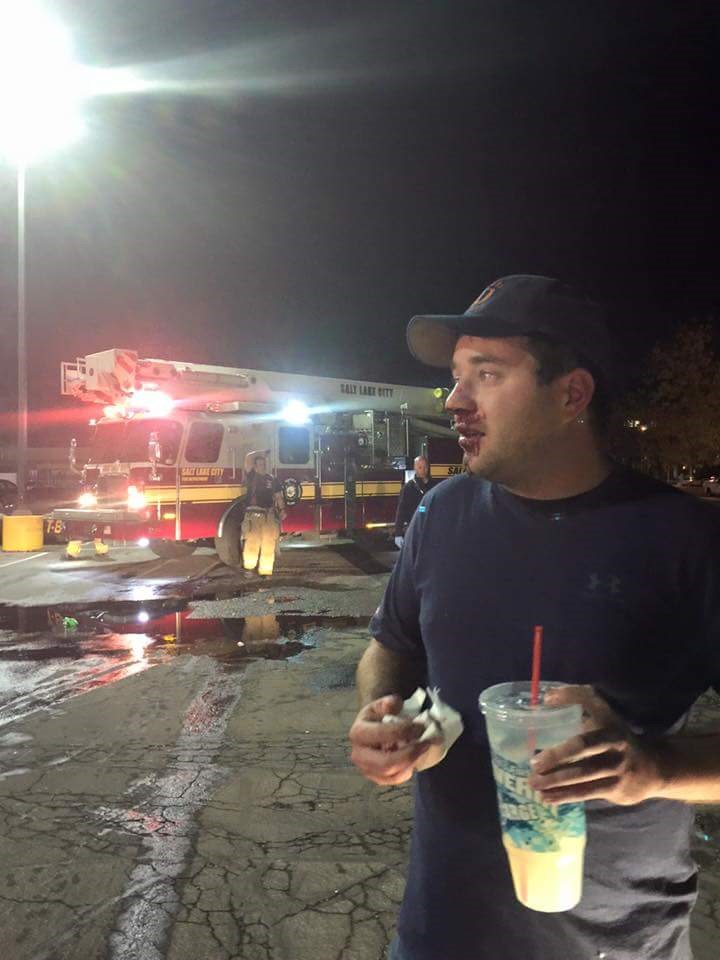