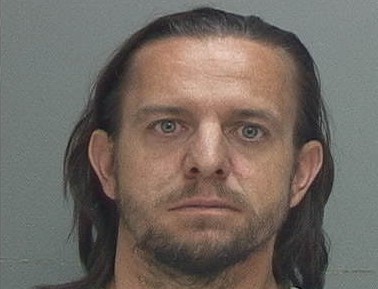 MILLCREEK, Utah – Unified Police are asking for the public’s help finding a man accused of running a scam on the elderly in Millcreek.

Police said Outcalt claims to work for the alarm company on the home’s sign and tells residents he is there to repair or upgrade the system in exchange for cash.

33-year-old Lanny Warren Outcalt seen sitting on the curb outside of a bank waiting for the victim.

Outcalt has also been known to tell residents he is painting addresses on curbs.

According to Unified Police, several of the victims are elderly and show signs of dementia including an 87-year-old woman who gave the suspect $4,800.

Police said, on two different occasions, the suspect accompanied the victim to the bank and waited outside while she made the withdrawals.

The suspect then took the money and disappeared, never having installed an alarm system.

UPD investigators said Outcalt was caught on surveillance cameras at the bank.

In one of the photos, Outcalt is seen sitting on the curb outside of the bank waiting for the victim.

UPD investigators said they would like to talk to Outcalt about this incident and similar events.

The Unified Police Department’s Millcreek Investigation’s Unit said it would like to hear from anyone who might have information at (385) 468-9634.