MIDVALE, Utah -- Three banks were robbed in the span of several hours in the Salt Lake County area Friday afternoon, and police said they believe the crimes may be the work of two men working as a team.

Lt. Lex Bell, Unified Police Department, said they suspect one person in the duo enters the bank for the robbery while the other drives. He said they believe the pair has changed roles from bank to bank, so while the person who went inside the building may or may not have been the same in all three cases, it appears each of the crimes are related.

According to the Unified Police Department, the first robbery occurred at a Key Bank at 924 East Fort Union Boulevard when a suspect passed a note to a teller demanding money.

The suspect is described as being a white male in his 20s who stands 5-feet 5-inches tall and has a slim build. The man is pictured below and was last seen wearing blue jeans and a gray hoodie. The suspect left behind a shoe while fleeing the scene, and he was spotted heading south from the bank. 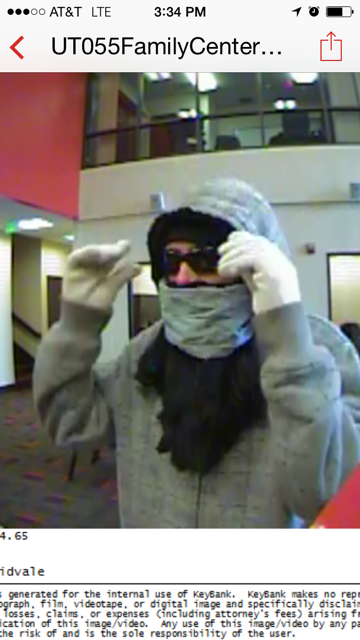 A second suspect is described as being a 36-year-old white male who was wearing a black hoodie, sunglasses, blue jeans and a fake mustache. That man is pictured in the Facebook post below.

The suspect who entered the bank in the third robbery was wearing a mask is pictured in the tweet below.

FOX 13 News heard report of the first incident just after 3 p.m., and around 4:15 p.m. police stated a man matching the suspect's description had held up a Key Bank at 4925 South Wasatch Boulevard.

Just before 5 p.m., there were reports of another bank robbery at a Key Bank located at 1500 South Foothill Boulevard.

FOX 13 News has reached out to police for additional information, and we will update this story as more details emerge. Anyone who recognizes the man should contact UPD at 801-743-7000.