Mali hotel attack: Gunmen barged in, shot at ‘anything that moved’ 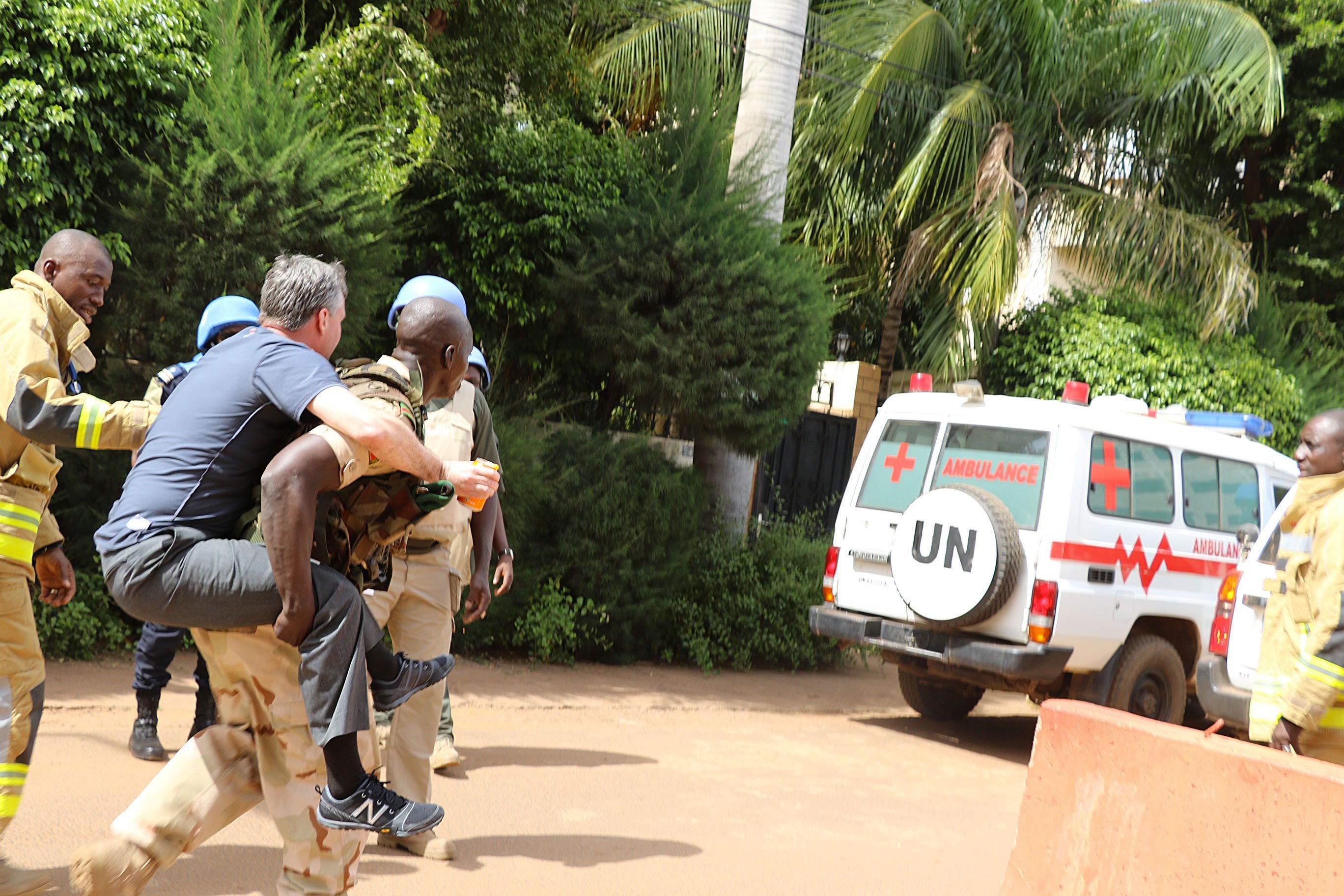 By Faith Karimi and Erin Burnett

(CNN) — Gunmen who raided a Malian hotel shouted “Allahu akbar” as they sprayed bullets on tables of people who were gathered for breakfast, a witness said.

The attackers did not say a word to anyone as they opened fire Friday morning, employee Tamba Couye said.

They shot at “anything that moved” as terrified patrons dashed for cover all over the hotel, he said.

By the time Malian and U.N. security forces rushed in and ended the siege hours later, bodies were scattered across the floors of the Radisson Blu Hotel in Bamako.

At least 19 people were killed in the attack, said Olivier Salgado, a spokesman for the U.N. mission in the nation.

In addition, two attackers died, he said, but it’s unclear whether security forces killed them or they blew themselves up.

Employee: They shot at everyone

Couye was at the restaurant when attackers barged in.

“They started firing at the tables,” he said. “They walked through the hotel door and started to shoot at everybody. Then they returned to the restaurant and closed its doors.”

He hurriedly evacuated employees through an exit door as chaos erupted.

“One of the attackers was yelling “Allahu akbar!,” he said.

Michael Skapoullis said he was using the hotel’s gym when he noticed fellow exercisers leaving. Though he was listening to music and hadn’t heard anything, he followed.

He walked to a door leading to the hotel lobby, and knew something was wrong.

“When I opened the door, I saw, on the floor, bullets,” he said. “So I gently closed the door.”

He fled back to the gym, and eventually left the hotel using a side door.

The hotel was hosting delegations attending peace talks. The former French colony has been battling Islamist extremists with the help of U.N. and French forces.

About 140 guests and 30 employees were there when the attack began, the Radisson chain said.

The hotel in an upscale neighborhood in Bamako is a hub for international guests, and is a 15-minute drive from the main international airport.

Mali has declared a 10-day state of emergency and three days of national mourning in which flags will be flown at half-staff.

Islamist militant group Al Mourabitoun claimed it carried out the attack together with al Qaeda in the Islamic Maghreb, according to the Al Akhbar news agency.

It said the attack was retaliation for government aggression in northern Mali, Al Akhbar reported. The group also demanded the release of prisoners in France.

Algerian jihadist and leader of the group, Mokhtar Belmokhtar, may be behind the attack, French Defense Minister Jean-Yves Le Drian told France’s TF1. But he said France was not sure.

Belmokhtar was targeted in a U.S. airstrike in Libya in June. While Libyan officials said he had been killed, their U.S. counterparts never confirmed his death publicly.

Why was the hotel targeted?

Mongi Hamdi, head of the U.N. mission in Mali, said the diplomats’ meetings may be a likely reason why the hotel was targeted.

“I think this attack has been perpetrated by negative forces, terrorists, who do not want to see peace in Mali,” Hamdi said.

Speaking in Malaysia, U.S. President Barack Obama said swift action of Malian and other security forces saved lives. He said the victims were “innocent people who had everything to live for.”

Mali has struggled with instability and Islamist extremists for years.

After a March 2012 military coup plunged the country into chaos, Islamist extremists with links to al Qaeda carved out a large portion of northern Mali for themselves.

At the Malian government’s request, France sent thousands of troops in 2013 to help push out the militants. The U.N. also established a peacekeeping mission to keep the government secure enough to continue a peace process.

Though military pressure largely drove Islamist militants from cities, they regrouped in the desert areas, said J. Peter Pham, director of the Africa Center at the Washington-based Atlantic Council.

“Unfortunately, this (hotel) is a likely target” because it is popular with international guests, Pham said.

A day before the attack, French President Francois Hollande praised his troops for fighting Islamists in the former French colony. It also came a week after ISIS targeted France with shootings and suicide bombings, killing 130 people.

Victims were from all over the world

As news of the attack spread, officials from various nations accounted for their citizens.

Six Russian nationals “were gunned down together with 13 [others] in the hotel restaurant in the first moments of the terror attack,” the Russian Foreign Ministry said Saturday in a statement. Six other Russians were freed.

The family of Shmuel Ben Halal, a 60-year-old Israeli who worked as an educational adviser for Mali’s government, said he died as well.

And U.S. citizen Anita Datar died in the attacks, her brother Sanjeev Datar said. Democratic presidential candidate Hillary Clinton — who had Datar’s former partner as one of her senior policy advisers when she was in the Senate — remembered her as “the loving mother of a wonderful 7-year-old boy” and “a bright light who gave help and hope to people in need around the world.”

The victims also include Geoffrey Dieudonne, an administrative counselor for Belgium’s Parliament. He was in Bamako as part of a three-day French-language convention.

“We are devastated,” said Michaelle Jean, secretary-general of La Francophonie, an organization planning events on diversity and cultural expression as well as governance at the Bamako hotel. “We salute [Dieudonne’s] courage, strength of conviction [and] determination.”

In August, 12 people were killed in a hostage situation at a hotel in central Mali.

Soldiers stormed the hotel in Sevare to end the daylong siege that started when gunmen raided the hotel after attacking a military site nearby.

At the time, Mali said the attackers were affiliated with the Macina Liberation Movement, an Islamist militant group.