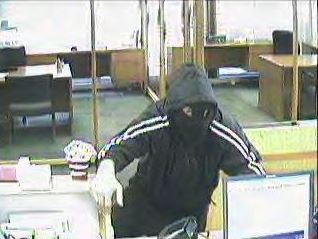 TREMONTON, Utah — Police in Tremonton are searching for a man who robbed a bank Friday afternoon, and they have released surveillance images in the hope the public can help them identify the suspect.

According to a press release from the Tremonton Police Department, the robbery occurred at a Wells Fargo bank, 140 West Main Street in Tremonton, at about 1:21 p.m.

The suspect entered the bank, ordered employees to the ground and then jumped over the teller’s desk. Then, he ordered the tellers to open their cash drawers, and after collecting the cash the man fled the bank on foot. Tremonton police stated the man did not display a weapon or indicate that he had a weapon during the robbery.

The suspect is pictured above and is described as being a white male who stands 6-feet tall and who has a skinny build. He was wearing a black warm-up jacket with two white stripes down each sleeve, and he had the hood of his jacket pulled up. The man was also wearing a stocking cap with eye holes cut out of it over his face, and he was wearing dark-colored pants.

The case is being investigated by Tremonton PD as well as personnel from the FBI.

Anyone who recognizes the suspect or who has knowledge of his whereabouts is asked to call Box Elder County Dispatch at 435-734-3866 and then ask to speak to a Tremonton officer.