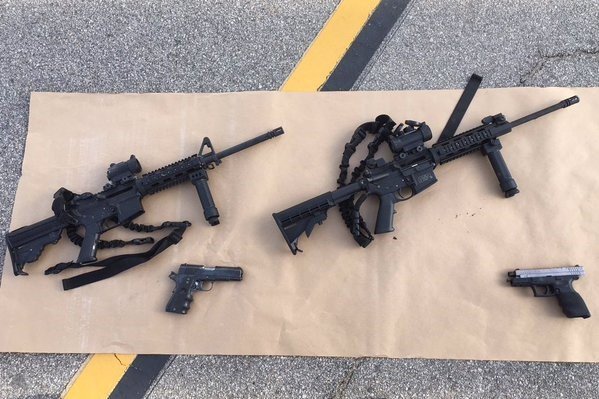 By Greg Botelho and Steve Almasy

(CNN) — One of the first officers to respond to Wednesday’s mass shooting in San Bernardino said he had trained for events like this, but the scene was still surreal.

“It was unspeakable, the carnage that we were seeing, the number of people who were injured and, unfortunately, already dead, and the pure panic on the faces of those individuals that were still in need and needing to be safe,” San Bernardino Police Lt. Mike Madden told reporters Thursday, describing the aftermath of the attack by a married couple at a holiday party for health department workers. The names of the victims were released Thursday evening.

Madden and three other officers were operating under the assumption that the shooters were still in the conference center somewhere as they entered the room that held a Christmas tree and festive decorations.

He said he could still smell the gunpowder from when Syed Rizwan Farook and his wife, Tashfeen Malik, fired semiautomatic rifles into the crowd of about 80 people.

He said he could feel the panic of the survivors of the San Bernardino shooting massacre in the room.

“It was extremely loud,” Madden told reporters, describing the aftermath of Wednesday’s mass shooting there. “The fire alarms were going off. There were people who were obviously injured and obviously in great amounts of pain. And that was evident in the moans and the wails that we were hearing.”

Authorities say they are still not sure of the shooters’ motive, but terrorism likely was part of the killers’ plan.

FBI: Farook appeared to have been radicalized

Farook was apparently was radicalized and in touch with people being investigated by the FBI for international terrorism, law enforcement officials said Thursday.

Farook’s apparent radicalization contributed to his role in the mass shooting of 14 people Wednesday during a holiday party for the San Bernardino County health department, where Farook worked, sources said.

Still, the radicalization wasn’t necessarily the only driver behind the carnage, as workplace grievances might have also played a role. President Barack Obama hinted as much Thursday when he said that the attackers may have had “mixed motives.”

And two government officials said no red flags were raised when he’d gone to Saudi Arabia for several weeks in 2013 on the Hajj, the annual pilgrimage to Mecca that Muslims are required to take at least once in their lifetime. It was during this trip that he met Malik, a native of Pakistan who came to the United States in July 2014 on a “fiancée visa” and later became a lawful permanent resident.

Saudi and U.S. officials said records show Farook also was in Saudi Arabia in July 2014. He was there for nine days, a Saudi official said. A U.S. official described the 2014 trip as Farook’s “last recorded” trip to the country.

Officials had previously said neither Farook nor Malik were known to the FBI or on a list of potentially radicalized people. Nor had they had any known interactions with police until Wednesday.

Yet Farook himself had talked by phone and on social media with more than one person being investigated for terrorism, law enforcement officials said.

The communications were “soft connections” in that they weren’t frequent, one law enforcement official said. It had been a few months since Farook’s last back-and-forth with these people, who officials said were not considered high priority.

FBI official: ‘What is the motivation for this?’

As to what role those communications played in the San Bernardino carnage, the official said, “We don’t know yet what they mean.”

Added Bowdich, from the FBI: “That is the big question for us: What is the motivation for this?”

San Bernardino Police Chief Jarrod Burguan echoed that sentiment, while adding that whatever led the two to launch Wednesday’s assault, they could have killed more had they survived. He pointed to the discovery of hundreds of rounds of ammunition in their rented black SUV as well as in their apartment.

Authorities also found 12 pipe bombs there, as well as hundreds of tools that “could be used to construct IEDs or pipe bombs,” the chief said.

“If you look at the amount of obvious preplanning that went in, the amount of armaments (they) had, the weapons and the ammunition, there was obviously a mission here,” added Bowdich. “We know that. We do not know why.

“We don’t know if this was the intended target or if there was something that triggered him to do this immediately. We just don’t know.”

Also Thursday, law enforcement officials said two smashed cell phones were recovered from a garbage can near one of the crime scenes connected to the shooting.

The San Bernardino County coroner on Thursday released the names of the 14 people killed:

The nightmare began at Wednesday’s holiday party, which San Bernardino’s police chief said that Farook had left abruptly “under circumstances that were described as angry.”

He and his wife returned around 11 a.m. (2 p.m. ET) dressed in “black … tactical gear” and heavily armed. Each had a semiautomatic rifle and a pistol. Then they opened fire, unloading 65 to 75 rounds.

Farook and his wife slipped out a door and into a SUV, which they’d rented locally and had Utah plates.

By then, officers had arrived and began chasing a number of leads. One of them led them to Farook, after another person at the party at Inland Regional Center expressed “some concern over his behavior,” Burguan said Thursday.

Officers went with a search warrant to the couple’s rented apartment in the neighboring city of Redlands, where they saw a black SUV drive by them, slowly at first, before speeding away.

A police car took up pursuit, and the SUV raced back toward San Bernardino. Then came shots from that vehicle, and a barrage of police gunfire in return.

The couple ended firing at least 76 rounds, while the 21 responding police officers unleashed about 380 rounds of their own, according to Burguan.

By the time the last shot rang out, the SUV was riddled with bullet holes. And Farook and Malik were inside, dead.

The husband and wife didn’t leave a note to explain their attack, nor did they say anything during the bloodbath, said San Bernardino’s police chief.

But they left behind plenty of ammunition and explosives, including three rudimentary devices packed with black powder and rigged to a remote-controlled toy car at the shooting site. None of these went off. The remote was found inside the SUV along with another pipe-like device, which was not an explosive, Burguan said.

Hundreds of unspent rounds were discovered in the vehicle, plus two .223-caliber rifles and two pistols. All were legally purchased three to four years ago, according to Burguan.

More ammunition and more bombs were found inside the couple’s rented apartment in Redlands.

Farook and Malik had enough firepower to do more killing.

“They were equipped,” the San Bernardino police chief said. “… And they could have done another attack.”

Farook, an American citizen, was an environmental health specialist with the San Bernardino County health department, which was holding the holiday party. He had worked there for five years.

In an online profile, he described himself as a “Muslim Male living in USA/California/riverside” and his family as “religious but modern.”

He “enjoys working on vintage and modern cars, reads religious books, enjoys eating out sometimes. Enjoys travelling and just hanging out in the back yard doing target practice with his younger sister and friends,” his profile read.

Farhan Khan said he last talked to Farook, his brother-in-law, a week ago. Farook’s family — including his mother, with whom he and his wife had left their 6-month-old daughter and claimed they were heading to a doctor’s appointment — had tried to reach him all day Wednesday but could not.

“I have no idea why he would he do something like this. I have absolutely no idea. I am in shock myself,” Khan said. “I don’t have words to express how sad and how devastated I am.”

Whatever their intentions, Farook and Malik caused an avalanche of pain. San Bernardino Mayor Carey Davis saw this suffering in the eyes of relatives of those killed, whose bodies were still in the Inland Regional Center early Thursday, according to county sheriff’s spokesman Deon Filer.

Davis told CNN, “The desperation and despair that they feel, we feel that for them also.”

Once again after a mass shooting, Obama appealed Thursday for something to be done to prevent more heartache.

“Right now, it’s too easy,” he said. “We’re going to have to search ourselves as a society … to take basic steps that would make it harder — not impossible, but harder — to let individuals get access to weapons.”