UPDATE: Lt. Lex Bell of the Unified Police Department said Thursday they have captured the man suspected in the series of robberies at hotels and banks. The suspect was arrested Thursday morning after tips from the public who saw media reports about the crimes led authorities to a home in south-eastern Salt Lake County.

A press release sent later in the day identified the suspect as Scot B. Wilcox, and they stated the man has been booked into the Salt Lake County Jail on multiple charges of robbery and aggravated robbery.

"We would like to thank the public for their assistance in identifying this individual," police stated in the release. "If viewers had not recognized Mr. Wilcox, there is a very good chance he would still be free tonight and may have continued to commit violent crimes. Also, thank you to all the media outlets for their help in broadcasting the surveillance photos and description."

According to Unified Police, the “bucket list bandit” is responsible for crimes that occurred in Sandy, Midvale, Murray, Sandy and Draper at banks and hotels. Based on the similarities in each incident, police suspect the same man is responsible for all robberies.

The first robbery occurred in Sandy on Nov. 4 at a Hampton Inn. The suspect walked in and handed the clerk a note demanding cash.

The suspect robbed a Staybridge Suites on Nov. 9 in Midvale and then a Wells Fargo inside a Fresh Market in Murray on Nov. 10.

All robberies occurred in the same manner, police say. The suspect handed the clerk a note demanding money.

On Monday, police responded to two robberies that occurred about 15 minutes apart. The first crime took place at US Bank inside a Smith’s in Sandy then in Draper at an America First Credit Union inside a Harmons.

Clerks all described the suspect as a Caucasian man between 50 and 60 years old with grey hair and heavy set. In some instances he was wearing the same green baseball cap during different robberies, police say.

No injuries occurred at any of the crimes. Anyone with information on the identity of the suspect is asked to call UPD Violent Crimes Unit at 385-468-9814 or Sandy, Murray and Draper police at 801-840-4000. 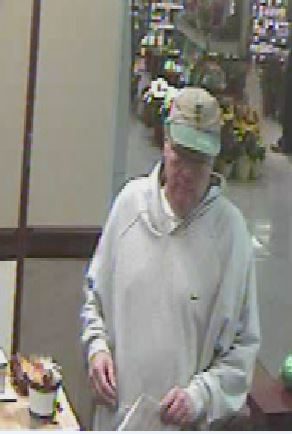