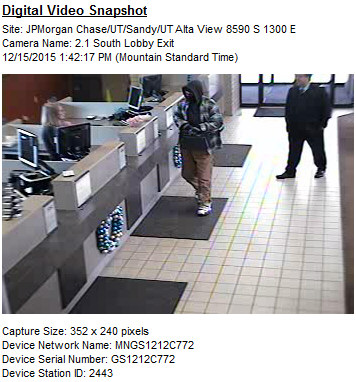 SANDY, Utah — Police are seeking the public’s help in locating a suspect in a bank robbery in Sandy Tuesday afternoon.

At about 1:45 p.m., a man walked into a Chase Bank, 8590 S. 1300 East, and demanded money from the teller at the counter, according to a press release from Sandy police. No weapon was threatened or seen.

The teller complied and the suspect left the bank with an undisclosed amount of money.

The man is described as a white, about 5 feet 8-10 inches tall, with a thin build.

He was wearing a black hoodie with a plaid jacket over it, brown cargo pants, a black mask covering his mouth and black sunglasses with reflective lenses.

Anyone with information on this incident is asked to call Sandy police at 801-568-4636.