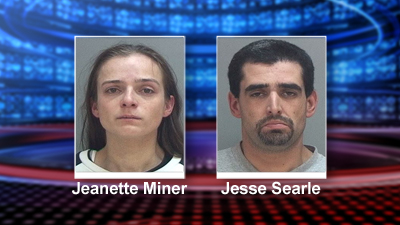 WEST VALLEY CITY, Utah — West Valley City police said two suspects have been arrested and a third suspect is outstanding after a man was found dead in a street Tuesday evening.

Police have also identified the victim as 49-year-old Eric Carter. Jeanette Miner, 26, and Jesse Searle, 34, were arrested on suspicion of murder, robbery and obstruction of justice.

According to West Valley City Police spokeswoman Roxeanne Vainuku, dispatchers received a call about a vehicle theft in progress at around 6 p.m. Tuesday.

The caller told dispatch a man was in the process of stealing a trailer, hooking it up to his pickup truck and pulling it away.

The call was lost and officers were sent to the scene. A few blocks away from where the 911 call came through near church parking lot, 5050 W. Royal Ann Drive, they found a man dead in the street.

Officials said Carter had been run over by the trailer and killed.

Police also said they found the suspect’s vehicle, a Dodge pickup truck, and the “Wells Cargo” trailer that had been reported stolen in two separate locations.

Investigators are working to determine the connection between the two incidents. They believe they are related because they are in close proximity to each other.

Anyone with information that may aid police in their investigation is urged to call West Valley City police at 801-840-4000.

Police are expected to release more information later in the day Wednesday. Watch FOX 13 News and fox13now.com for updates.

UPDATE: Victim in stolen/trailer/body found case is 49yo Eric Carter. The victim was run over by the trailer and killed.

UPDATE: looking for white 2000 Dodge pickup truck, UT plate C403K. Believed to have silver tool box in back. Could be pulling trailer.