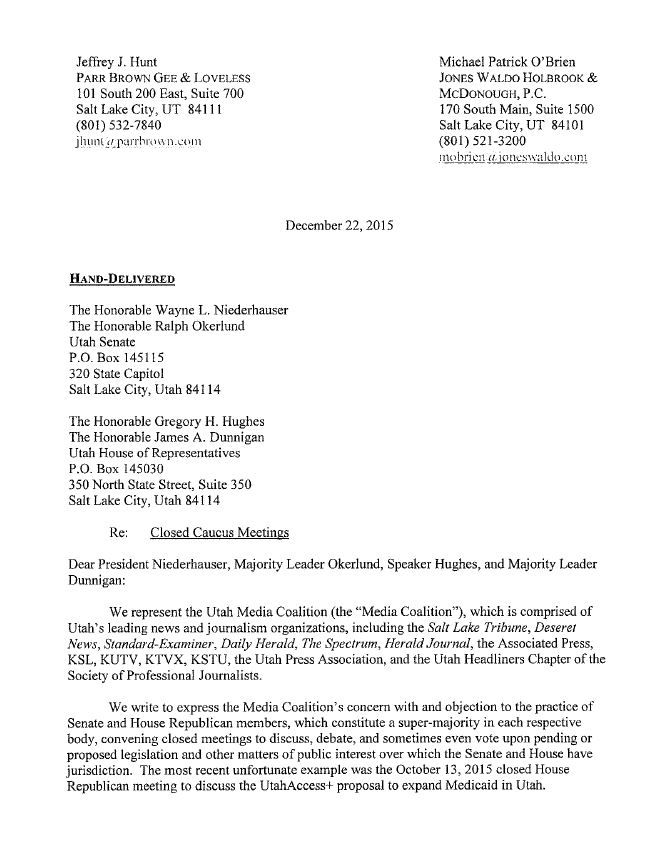 FOX 13 News is a member of the coalition as well as the Salt Lake Tribune, Deseret News, Standard-Examiner, Daily Herald, The Spectrum, Herald Journal, the Associated Press, KSL, KUTV, the Utah Press Association and the Utah Headliners Chapter of the Social of Professional Journalists.

Read full letter in the gallery above.

The group met for nearly four hours. When the doors opened, they killed a Medicaid expansion bill. The House Minority Leader was left out of discussion, as were 11 other Democrats in the House.

Such action is in violation to the Open and Public Meet Act. The code is defined that “the state, its agencies and political subdivisions, exist to aid in the conduct of the people’s business” and it is the intent of the Legislature that the state, its agencies and its political subdivisions…take their actions openly; and…conduct their deliberations openly.”

“As you know, Medicaid expansion is an issue of tremendous public importance and interest to Utahns,” the letter states. “Regardless of one’s view of the issue, it is clearly a topic that, when considered by either body of the Legislature, deserves – and is legally entitled to – a robust and transparent debate.”

The Media Coalition urged Republican leaders to open the House and Senate Republican caucuses to the public and the news media so the public may observe what business is conducted.

“Opening caucuses to the public and the media promotes public understanding of the legislative process, public accountability, and public trust,” the letter states. “Indeed, it may provide the only opportunity for the public and the news media to observe and meaningful discussion or debate on certain legislative issues.”