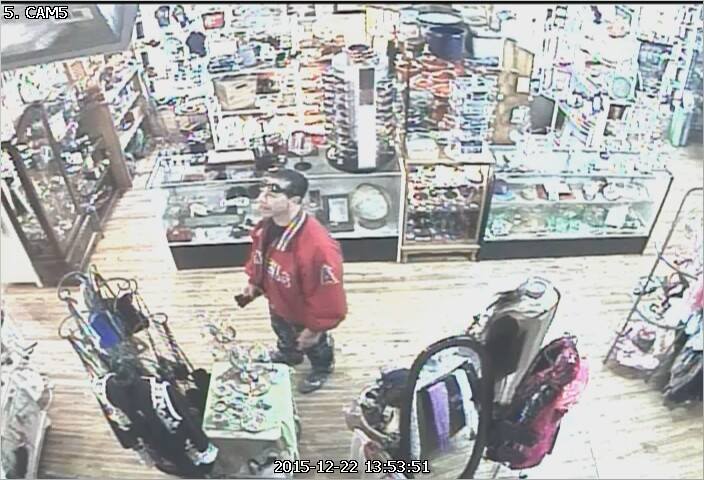 ST. GEORGE, Utah — An antique and vintage gift shop in southern Utah is asking the public for help identifying a man who allegedly stole hundreds of dollars in merchandise from the shop a few days before Christmas, and they have posted surveillance footage and images showing the alleged crime.

Surveillance footage captured the afternoon of December 22 appears to show the suspect shoplifting several items at Annie’s Vintage Garden, 3 North Main Street in St. George, and the camera captured a recording of the man’s voice as well. See below for that footage.

A Facebook post from the shop states the suspect is a male who appears to be in his mid-30s to mid-40s who stands around 5-feet 10-inches tall and weighs about 175 pounds. The man has short, dark hair that was neatly trimmed and he has a thin mustache. He was wearing camouflage patterned pants and a red jacket with ANGELS across the front and the team’s logo on the shoulder.

The post from the shop states: “At the end of the video clip there is a very clear audio recording of his voice when, after having robbed us of several hundred dollars of merchandise, he has the gall to ask if the candy canes are free. Then he chuckles as he walks out the door.”

The shop stated that there were multiple victims of the thefts, as the store features the products of numerous vendors, and that the thefts amount to hundreds of dollars of merchandise.

The St. George Police Department confirmed to FOX 13 News they were investigating the incident.

Anyone who recognizes the man or who has knowledge of the alleged crime is asked to contact St. George PD. Dispatch can be reached at 435-627-4300.

The full post from the shop is available below: