WEBER COUNTY, Utah -- Police are seeking the public’s help in identifying a suspect believed to be connected to several robberies along the Wasatch Front over the past month.

Seven robberies have occurred since Dec. 9 to Jan. 7, Ogden County Sheriff’s Office reported Tuesday. The crimes occurred in Ogden, Riverdale, Farr West, Clinton, Taylorsville and Centerville. The video above shows surveillance footage of a robbery that occurred at Domino's in Farr West on Dec. 13.

The suspect is described as a Hispanic man with lighter skin about 25 to 40 years old. He is also as 5 feet 2 inches to 5 feet 6 inches tall with a stocky build.

During the robberies, the sheriff’s office states, the suspect immediately brandishes a gun and demands money from the clerks.

“He has made threats of violence, but no shots have been fired in any of the cases,” according to a press release from the sheriff’s office.

All robberies were committed in the evening and the suspect made off with a small amount of cash.

The sheriff’s office suspects the man is driving a dark-colored, older-model four-door sedan.

The suspect should be considered armed and dangerous. Anyone with information regarding the robberies is asked to call Weber Consolidated Dispatch Center at 801-629-8221 or Weber County Sheriff’s Investigations Bureau at 801-778-6631. 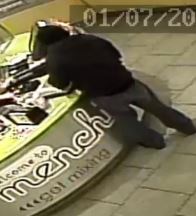 Locations and dates of the robberies are listed below:

Jan. 7 at Menchies at 663 W. Market Pace Drive in Centerville