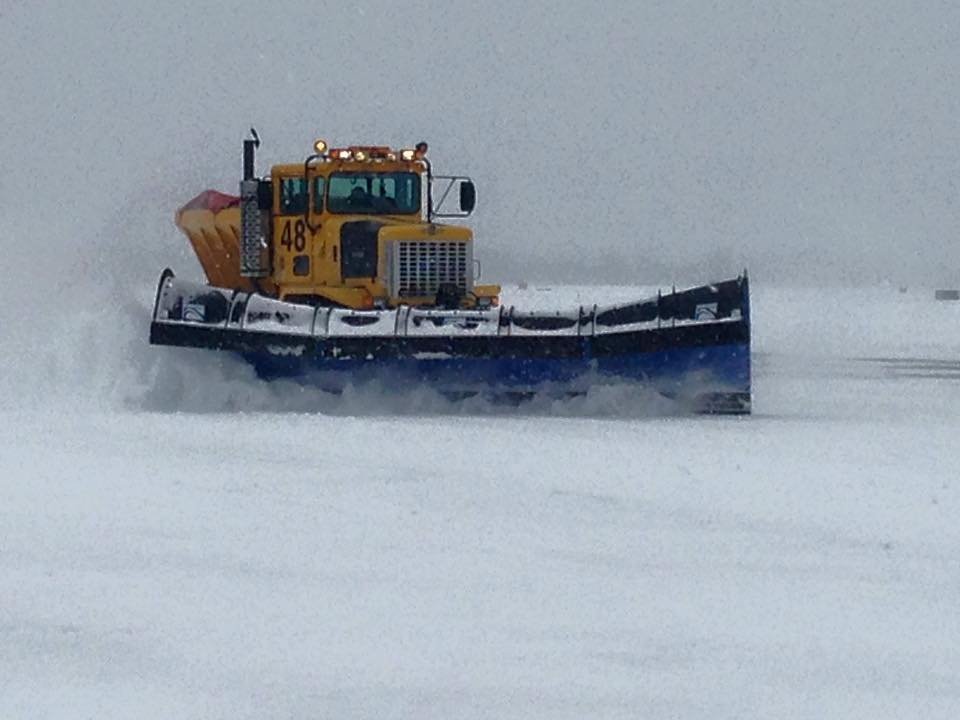 (CNN) — A massive winter storm clobbered the eastern United States on Saturday and in some places appeared poised to dump more snow than expected — including up to 30 inches in downstate New York and up to 4 feet in Maryland and West Virginia, officials and forecasters said.

With snow falling as fast as 3 inches an hour, New York officials said road travel in New York City and Long Island would be banned starting at 2:30 p.m. ET. Above-ground train service in the area would stop at 4 p.m.

Up to 85 million people have been in the path of the storm, which also caused motorists to be stranded on major highways in at least three states overnight from Friday to Saturday.

— All Broadway performances are canceled for Saturday due to the blizzard, according to the Broadway League.

— More than 50 people have been forced from their homes around Atlantic City, New Jersey, due to “significant flooding” from winds pushing ocean water into the streets, said Vince Jones, Atlantic City’s emergency management director.

— North Carolina Gov. Pat McCrory said a combination of more high winds statewide and “potential ice build-up tonight along the power lines” could lead to more power outages in his state. At 10:45 a.m., Duke Energy reported about 140,000 customers without power in the Carolinas.

— Washington, D.C., had seen up to 13 inches of snow by 10 a.m. Saturday, with another 10 inches possible by the time the storm finally passes, Mayor Muriel Bowser said. Wind gusts of about 50 mph have been reported, and authorities managed to answer all 300 calls to emergency dispatchers since the blizzard hit Friday, she said.

• More than 35 inches of snow reported near Hancock, Maryland, by Saturday afternoon.

• At least nine people dead nationwide (Six fatalities were in North Carolina, two in Virginia and one in Kentucky.)

• 18-48 inches of snow possible in some areas, according to meteorologists.

• 989 traffic crashes and 793 disabled vehicles were responded to by Virginia State Police as of late Friday night.

• More than 8,600 flights were canceled from Friday through Sunday, according to FlightAware.com.

• More than 200,000 customers in 13 states were without power Saturday because of the storm, according to various energy companies. Many of them were in the Carolinas and New Jersey.

• 33 million people are under blizzard warnings.

The outlook? Snow. Lots and lots of snow.

As many as 30 inches of snow may be on the ground in southern New York by storm’s end, Gov. Andrew Cuomo said Saturday.

That’s a significant jump from the 16 inches that had been predicted for the city earlier in the morning.

Road travel will be banned in New York City and the “downstate area,” starting at 2:30 p.m. Saturday because of the snowstorm, Cuomo said. City bus service was stopped at noon. Above-ground train service and Metro-North and Long Island Rail Road trains will stop around 4 p.m. ET, Cuomo said.

All Broadway performances were canceled for Saturday due to the blizzard, according to the Broadway League.

The snowfall could rank among the city’s top five accumulations in recorded history, said de Blasio, the mayor.

“If you are out on the street, get in now,” de Blasio said.

The wind-driven snow appeared to descend sideways, making it difficult to see. On Manhattan’s Upper West Side, doctoral student Luis Abraham Garcia of Mexico pushed a wheeled suitcase on the snow-covered sidewalks Saturday morning, hoping to catch an outbound train.

He’d been in Washington on Friday, intending to fly home to Mexico City. However, the flight was canceled, so he traveled to New York to catch a flight Saturday. That flight, too, was called off. So now he hoped to take a train to Chicago, where he would try again to fly home.

This was Garcia’s first snowstorm.

“I’ve never seen snow like this. I’ve been to New York during other seasons — in the cold and the heat — but never saw it under a blanket of snow,” he said.

In Washington, snow arrived gently Friday afternoon and quickly intensified. Thirteen inches had fallen there by 10 a.m. ET Saturday, and another 10 could fall by the time the last flakes come down Saturday night, Mayor Bowser said.

As in New York City, the storm could rank in Washington’s top five snowfall accumulations. The record is 28 inches, set in 1922.

Bowser warned that there were “too many people on the streets, both driving and walking” in Washington on Saturday morning.

“Visibility is poor, so anyone walking or driving in the area runs the risk of getting hit by crews who are trying to clear the roads,” she said.

As many as 48 inches of snow could fall in eastern West Virginia and northern Maryland, the National Weather Service said Saturday afternoon.

In that area, the town of Hancock, Maryland, had already received more than 35 inches of snow by 1:40 p.m. ET, according to the weather service.

Baltimore may get 18 to 30 inches between Friday and Saturday night, the weather service said. About 16 inches had fallen by early Saturday afternoon.

The wind, which could reach up to 50 mph or higher, is a big concern, as are sleet and black ice, which are affecting roads in North Carolina, according to the state’s department of transportation.

While many people in the Mid-Atlantic and Northeast stayed inside, major highways in Kentucky, West Virginia and Pennsylvania turned into parking lots Friday and Saturday, forcing people to stay put and try to stay warm for hours on end.

In central Kentucky, some drivers were stranded along a 35-mile stretch of Interstate 75 for as many as 19 hours, from Friday afternoon to Saturday morning.

Dani Garner, her three children, her husband and her mother-in-law were among those stuck on I-75, with long lines of similarly stranded cars and trucks in front of and behind her.

“We’ve got no food or water,” she told CNN early Saturday, adding that she was thankful they had enough gas to run the heater. “Honestly, if my van wasn’t heated up I’d probably be boxed in with ice right now.”

Kentucky State Police Capt. David Jude said the stretch Garner is on had frozen over, and trucks and cars slid off the roadway. Police officers and National Guard troops were giving motorists supplies and getting wrecked vehicles off the highway, police said.

Traffic largely was moving along the stretch by 8:30 a.m. Saturday, motorists said.

A similar situation played out along a westbound portion of the Pennsylvania Turnpike between Breezewood and New Stanton, State Police Capt. Brian Milore told CNN.

Claire Jackson, 17, told CNN Saturday morning that her bus had been at an “absolute standstill” since 8 p.m. Friday.

“I just see cars,” Jackson said, who was with about 50 students going from Washington back home to Kansas City, Missouri. “All the hazards are blinking.”

Also stuck on the turnpike overnight: A bus carrying the Duquesne University men’s basketball team, on the road after Friday afternoon’s victory against George Mason in Virginia. Photos that the team posted to Twitter showed senior forward Nick Foschia making a snow angel in the road and a line of vehicles stranded on the highway.

And in West Virginia, National Guard members were dispatched to help move stuck tractor trailers that blocked a roughly 11-mile stretch of Interstate 77 north of Charleston. The state’s emergency management agency said late Friday that the highway was “completely shut down” — a status that hadn’t changed by mid-morning Saturday.

Those states were hit hard by a combination of snow, sleet, ice and strong winds, though they’re hardly the only places experiencing major disruptions.

Most airports in the Mid-Atlantic virtually were shut down.

Mass transit services in Washington and Baltimore have been suspended for the weekend. And some Amtrak service to and from the East Coast has either been canceled or truncated.

Snow and ice weren’t the only concern. The storm’s winds were pushing water from the ocean into New Jersey’s barrier islands.

More than 50 people have been displaced from their homes around Atlantic City due to “significant flooding,” said Vince Jones, Atlantic City’s emergency management director.

Jones said Saturday that an “extremely high” tide and strong winds “really pushed the water up from the ocean onto the streets.”

A river of ankle-deep seawater spilled into the streets of Margate City just south of Atlantic City on Saturday morning, lapping up against sandbags that business owners put in front of their stores, a CNN crew reported from the scene.

New Jersey still faced misery from snow, which could fall Saturday at a rate of 2 to 3 inches an hour in some places, Gov. Chris Christie said.

To top it off, the winter storm has forced the postponement of hundreds of events — including NBA games in Philadelphia and Washington, plus an NHL contest in the nation’s capital, as well as a rally for the Carolina Panthers ahead of their NFC professional football championship in Charlotte.

Though Friday’s game between the New York Rangers and Carolina Hurricanes went on as planned in Raleigh, pictures from inside the arena didn’t show much of a crowd.