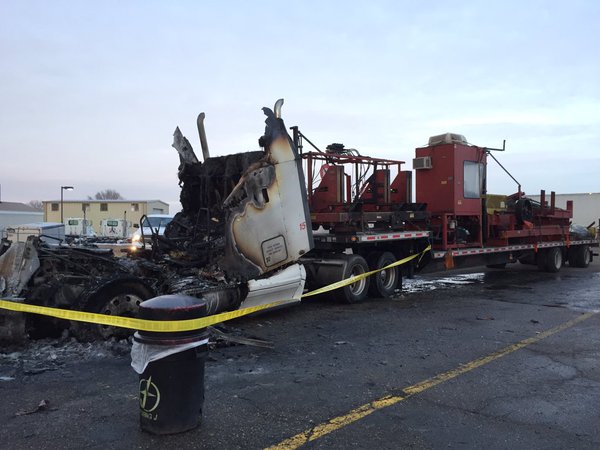 WEST HAVEN, Utah — No one was injured after a semi-tractor was destroyed in a fire at a Flying J in West Haven early Saturday morning.

At about 5 a.m., a trucker parked in the parking of the gas station, 1172 W. 2100 South, was woken up by a noise coming from the engine compartment, said Brandon Thueson, fire marshal for the Weber Fire District.

When she saw fire coming from the hood of the semi-tractor, Thueson said, the driver gathered what belongings she could then alerted the semitrailer drivers around her to move so fire crews could get into the area to put out the flames.

The driver was hauling machinery for a wood working mill. None of the equipment was damaged. Thueson didn’t know her final destination but said the driver was supposed to stop in Idaho Saturday.

It is unknown how the fire started. The cause is under investigation.

No other vehicles were damaged in the blaze.

Semi tractor fire this morning. Driver is okay no other vehicles involved. Cause under investigation . pic.twitter.com/U0a74OwcZP