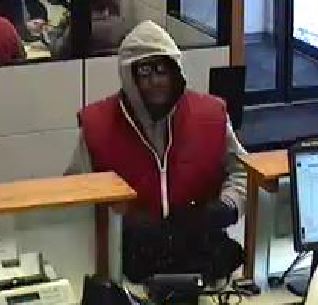 MILLCREEK, Utah — The Unified Police Department has released surveillance photos from a January 15 bank robbery in Millcreek, and they are hoping the public can help them identify the man.

According to a press release from police issued Thursday, the robbery occurred January 15 at 3885 South Wasatch Blvd. when the suspect walked into a Wells Fargo Bank, threatened the clerk with a gun and demanded money.

The suspect fled on foot initially but was observed entering a gray or silver sedan before leaving the area. There were no injuries reported in connection with the robbery.

The suspect, pictured above, is described as being a Caucasian male with a tan skin tone who stands between 6-feet 2-inches and 6-feet 4-inches tall. The man had a medium build, and police stated he smelled strongly of alcohol at the time of the robbery.

The man was wearing a red vest, a gray hoodie, jeans and black gloves. He was armed with a black handgun.

Anyone who sees the man or who has information about his identity is asked to call the Unified Police Department’s violent crimes unit at 385-468-9814.