CENTERVILLE, Utah -- A female is dead after a suspect in two carjackings crashed into her in Centerville while attempting to escape authorities Monday afternoon.

The incident started at about 4:30 p.m. when Kaysville police were dispatched to a carjacking at Mutton Hollow, west of Fairfield Road. Police received a report that a male and female forcibly carjacked a motorist in a maroon Mazda 6, according to a press release from Kaysville police.

While Kaysville police officers were interviewing the victim on the incident, authorities put out an attempt to locate on the stolen vehicle.

A few minutes later, officials say, a Unified police officer on his way to work, came upon a maroon Mazda 6, which was stopped on southbound Interstate 15 at about Lund Lane in Centerville.

A male and female, who were outside the vehicle, told the officer they had run out of gas.

Officials say the UPD officer was not aware of the carjacking report but thought the stop was suspicious.

At some point, the female jumped from the car on the freeway, officials say.

Davis County dispatch informed the officer that the male he encountered was a suspect in the carjacking. After that, officials say the officer tried to stop the male suspect as he went toward a black Volkswagen car, which was stopped. 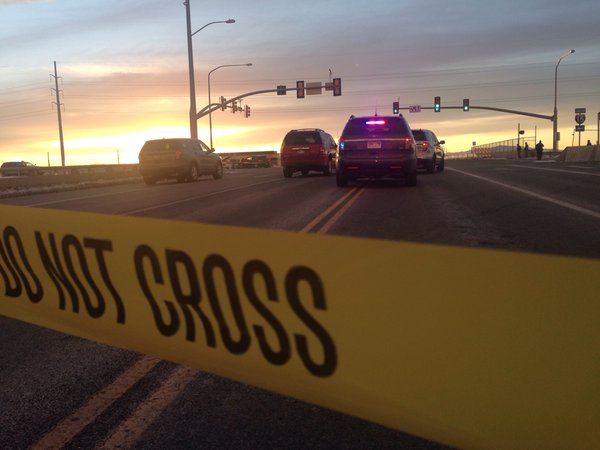 Police say the suspect fled going south on I-15 and exited at Parrish Lane.

The stolen Volkswagen went through the intersection of the off ramp and Parrish Lane and broadsided a female in a grey passenger car traveling east.

The female died and the suspect was injured and taken to an area hospital.

No police vehicles were in pursuit of suspect at the time of the crash, officials say.

The incident is currently under investigation. Parrish Lane will remain closed until about 9:30 p.m.

The name of the female killed in the car accident has not been released pending notification of family.

Deadly crash on the I-15 on ramp in Centerville. PD confirm a car jacking ending in this fatal @fox13now @cpdutah pic.twitter.com/2vGyCW7q8s

Avoid the Parrish Lane overpass. It will be shut down until approximately 8:00 pm.