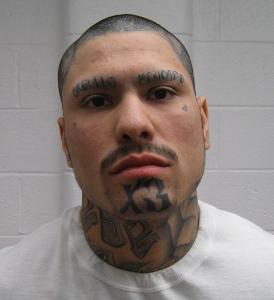 WEST VALLEY CITY, Utah — Police in West Valley City have officially identified a suspect who was shot by officers Tuesday evening after reports a man had fired a weapon, and according to police the man is a convicted felon and a documented gang member.

Police responding to a report of shots fired in the area of 3300 West and 4000 South around 6:30 p.m. Tuesday encountered 26-year-old Ricardo Lopez, who police said was armed with a handgun.

While the exact sequence of events is unclear, police state: “Shots were fired and Lopez was hit.” He suffered a single gunshot wound and is listed in stable condition Wednesday.

Neighbors said it’s an incident that has left their quiet street shaken.

“It’s a little more scary when, you know, it’s like literally in your back yard,” said neighbor Ozsie Fields. “What I was thinking was, like what could have happened if their kids would have been running around?”

According to the press release issued Wednesday afternoon, Lopez is a convicted felon, and as such is restricted from possessing a firearm.

Lopez’ step-daughter, Monika Castro, spoke exclusively to FOX 13 Tuesday night. She said she was shocked Lopez would have gotten himself into trouble with the law.

“It’s not really like him to get in trouble,” Castro said. “Especially like now, now that he has kids and everything. ”

Lopez’ record includes arrests for the following: receiving or transferring a stolen vehicle, fleeing, aggravated assault by a prisoner, carrying a prohibited weapon in a correctional facility, assault and DUI. The press release from police states Lopez is a documented gang member.

Salt Lake City Police Department is the outside agency investigating the officer-involved shooting.