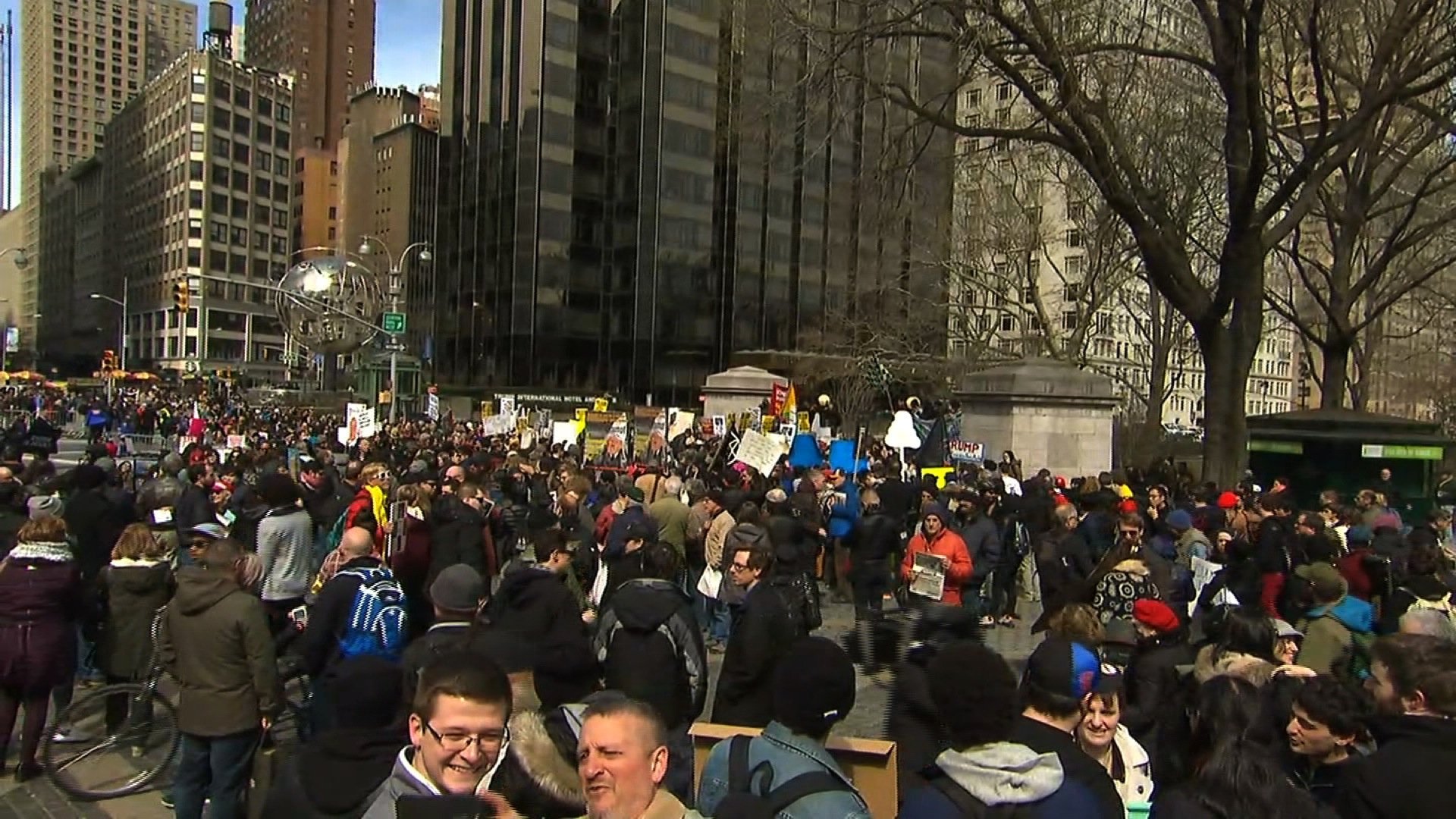 WASHINGTON (CNN) — Dozens of protesters blocked traffic near a Donald Trump event in Arizona on Saturday, while demonstrators marched in New York City to protest the GOP front-runner.

Enriquez described Shea Boulevard as the main artery into the area and the protesters’ actions were causing motorists to drive into oncoming traffic as they tried to get around them. Traffic was backed up for miles due to the blockage.

“This is causing huge issues for us,” Enriquez told CNN. He added, “We obviously have to get this road open.”

Enriquez later told CNN that three protesters were arrested and two cars were towed from the boulevard. The deputy emphasized that the arrests were due to protesters blocking the roadway, not because of the protest itself.

Protests at Trump rallies increasingly have become more contentious in recent days. Friday night, protesters outside a Trump rally in Salt Lake City, Utah, tried to breach the venue’s doors, causing police officers and Secret Service officers to abruptly shut them as Trump was speaking. And last week, scuffles between protesters and supporters in Chicago led Trump to cancel a rally there.

Trump on Saturday appeared with former Arizona Gov. Jan Brewer and Maricopa Sheriff Joe Arpaio, who endorsed the GOP front-runner in January. Arpaio rose to conservative fame with his aggressive roundups of undocumented immigrants and attention-grabbing tactics like clothing inmates in pink underwear.

Speaking to CNN’s Fredricka Whitfield earlier in the day, Arpaio said authorities are “going to do everything we can to continue to have this rally,” adding that authorities are “ready for any problems.”

“We’ll do everything possible to make sure we have free speech in this country. Donald Trump has a right to speak out and the people have a right to go in there and hear him speak,” Arpaio said. “If certain groups don’t like it, that’s OK. They have freedom of speech, but they’re not going to violate any laws. They’re going to have to pay the consequences.”

At the rally, Trump touched upon many of the themes that are familiar in his stump speeches — including bringing jobs back to the U.S. from overseas, tariffs on products made in Mexico and criticism of President Barack Obama’s foreign policy — but particularly focused on illegal immigration, a major issue in Arizona.

“So much crime. Drugs pouring though the border. People are now seeing it. And you know what? We’re going to build the wall and we’re going to stop it. It’s going to end,” Trump said.

He added, “Unless you have a border, you don’t have a country. Remember that.”

Trump also criticized Texas Sen. Ted Cruz, his main GOP opponent, once again calling him “Lyin’ Ted.” And the GOP front-runner kept up his attacks on 2012 GOP nominee Mitt Romney — who has led the charge to deny Trump the delegates he needs to win the nomination — saying “he choked like a dog” in the last presidential cycle.

Speaking in Tucson later Saturday, dozens of protesters crowded outside the Tucson Convention Center, chanting, “No more hate” and “Trump the racist.”

As he made his remarks, Trump was repeatedly interrupted by protesters, some of whom engaged in physical altercations with supporters. At one point, Trump turned around at the podium as he watched protesters escorted out of the venue.

While the protest in Fountain Hills was underway, crowds of demonstrators gathered in Manhattan to march from Columbus Circle near Central Park to Trump Tower on Fifth Avenue.

A small skirmish erupted when protesters started throwing water bottles at police, who were trying to keep them from impeding traffic. A handful of protesters were pepper-sprayed and some were arrested.

Along the march, tourists stopped to snap photos.

Protesters carried signs with messages such as “#CrushTrump” and shouted, “Hey, hey / ho, ho / Donald Trump has got to go.”

The march was organized by groups that included immigrant-rights activists and the “Cosmopolitan Antifascists.” A Facebook page for the group said it stands for “inclusion, diversity and human rights.”

One protester, Malu Huacuja, who is Mexican, said she was protesting Trump’s rhetoric on immigration.

“I am not a drug dealer,” she said. “I am not a criminal. I am not a rapist … Hatred is a very dangerous poison in the soul of humanity.”