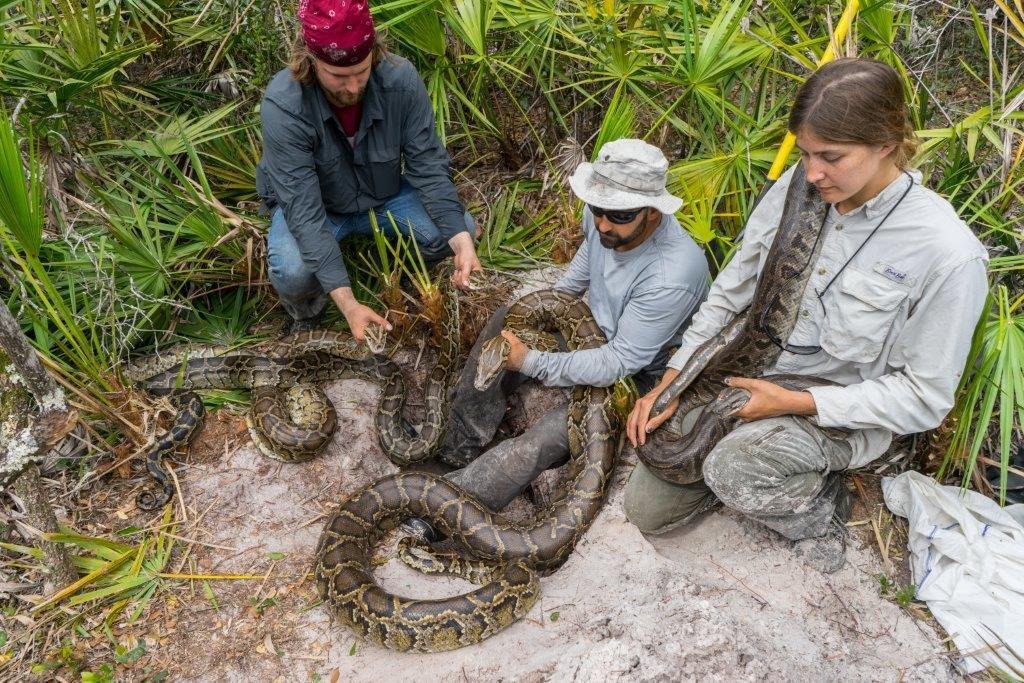 Following the monthlong Burmese Python removal competition designed to remove as many of the snakes from the Everglades as possible, there still remains an inordinate amount of pythons. Researchers who have been tracking Burmese pythons captured more than one ton over the last three months in southwest Florida.

Among the 43 pythons removed researchers found the largest male python ever documented in south Florida, measuring 16 feet and weighing more than 140 pounds.

Over the last three years, researchers at the government agency have enlisted the help of captured pythons.

By tagging “snitch snakes” with radio trackers, researchers hope to study where the pythons are living in order to catch other snakes. Fifteen adult pythons are currently being surveyed by radio tags so scientists can learn more about the ecological implications of the invasive species.

For example, a captured male python named Captain Kirkland has been credited for the removal of the 43 snakes, by leading researchers to more pythons and allowing them to gain a better understanding of the animal’s movement patterns.

Due to the massive amount of pythons, the creature has become one of the top predators in the Everglades, morphing the area’s ecological landscape.

“The ecological impact of removing so many adult pythons from a relatively small area of Collier County can only be positive for our native wildlife,” said Ian Bartoszek, biologist for the Conservancy of Southwest Florida in a press release.

“We need to utilize all tools available and develop additional techniques to capture and remove Burmese pythons in Florida,” he said.

Once allowed as an exotic pet, officials trace the Burmese python’s entry into the ecosystem to 1992, when “Burmese pythons escaped from a breeding facility that was destroyed during Hurricane Andrew,” according to the Florida Fish and Wildlife Conservation Commission’s website. “It is also likely that pet pythons have been released in and around the Everglades,” it says.

The effect has been profound; the invasive species is responsible for causing the near “complete disappearance of raccoons, rabbits and opossums,” according to the USGS, and goes almost completely unchecked in its environment.