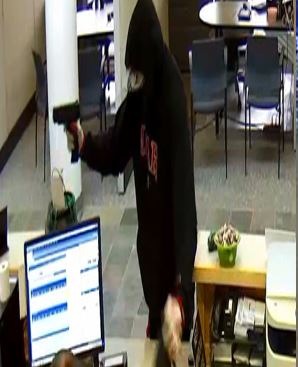 SALT LAKE COUNTY, Utah– The Unified Police Department is looking for a serial robbery suspect involved in various incidents around the valley.  Police are warning the public that the suspect is considered dangerous and armed.

According to police,  on March 15, the suspect entered the Deseret First Credit Union on 4645 South 2700 West in Taylorsville and demanded money from the teller with a handgun.  The suspect left the credit union with a undisclosed amount of money and drove away in a white SUV.   Police believe this man is also responsible for two aggravated robberies on March 18.  Victims in both robberies told police that the suspect pointed a gun at them and demanded their purses and pin numbers.   In both cases,  the suspect also left in a white SUV.

Investigators believe on the same day, the suspect was also involved in an accident in Salt Lake City while driving a stolen vehicle.   Police say the suspect carjacked a vehicle in the area after pointing a gun at the victim.  He wrecked this vehicle and carjacked another one, also at gunpoint.  The man was able to get away from police in the second vehicle.

The suspect is described as a very dark skinned African American male.  He is believed to be in his early to mid 20’s and approximately 6’2″ tall with a very thin built.

If you see or have any information leading to the arrest of the suspect, call Unified Police at 801-743-7000.