What we know about the terror attacks in Belgium 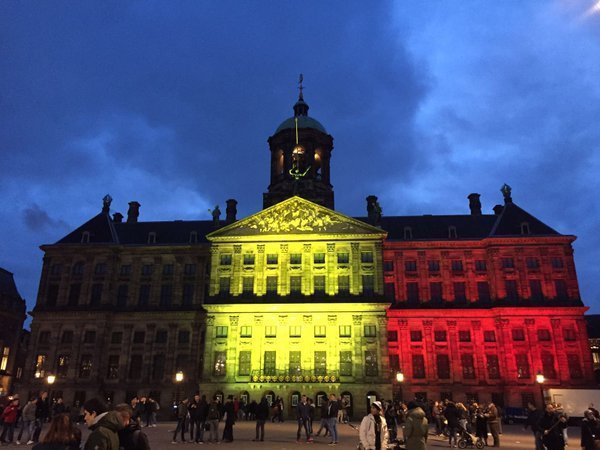 Khalid and Ibrahim El Bakraoui, Belgian brothers known to authorities for their track record of violent offenses, carried out two suicide attacks, authorities say: the former in the metro, and the latter at the airport. Another suicide bomber at the airport was alleged bomb-maker Najim Laachraoui, multiple European officials told CNN.

Here’s what we know so far:

One blast took place outside the security checkpoints for ticketed passengers and near the airline check-in counters, according to an airline official briefed on the situation.

Belgian federal prosecutor Frederic Van Leeuw said Wednesday that a third bomb, which he described as the “heaviest,” had been left at the airport by a suspect who left the scene.

He said it exploded “a few moments after the bomb squad arrived” because the explosives were unstable, but no one had been injured “thanks to the professionalism of the authorities at the scene.”

No guns or weapons were found at the airport, Van Leeuw said, contradicting earlier Belgian media reports that a Kalashnikov assault rifle was found.

Metro station: About an hour after the airport explosions, Khalid El Bakraoui, a Brussels-born 27-year-old, detonated a suicide bomb on the Brussels subway at the end of rush hour.

The bomber, who Van Leeuw said was identified by his fingerprints, was in the second car of the train at the Maelbeek metro station.

The station is in the heart of the city, where European Union institutions are based, making it a symbolic target for terrorists. NATO is also headquartered in Brussels.

Belgian authorities released an image of the three suspects believed to have carried out the airport attack.

The image, taken from surveillance footage, shows three men pushing luggage carts through the airport. In the center is Ibrahim El Bakraoui, 29. On the picture’s left, a similarly dressed man in black is Laachraoui, a Belgium counterterrorism official confirmed to CNN terrorism analyst Paul Cruickshank. He is believed to have been the second suicide bomber at the airport.

A third, also unidentified man in the picture is the suspect investigators say planted a bomb at the airport that later exploded without hurting anyone.

Authorities have launched a hunt for the man, pictured wearing a light-colored jacket and black hat.

The man is believed to have been a guide, charged with ensuring the others carried out the attacks, who then left the terminal, according to Van Leeuw and experts.

Interpol does not appear to have a red notice for his brother Ibrahim. It did not respond immediately to CNN requests for more information.

Speaking about the Bakraoui brothers, Van Leeuw said, “These two deceased suicide bombers had lengthy criminal records but (were) not linked to terrorism.”

Turkish President Recep Tayyip Erdogan told reporters Wednesday that his country had caught one of the Brussels attackers at a Syrian border crossing last June and deported him. Erdogan said Belgium was warned that the man was a foreign militant.

Erdogan didn’t specify which attacker, but his office later said it was Ibrahim El Bakraoui, who was picked up in Gaziantep, Turkey. Turkey flagged him to Belgian authorities.

Bakraoui was deported by Turkey to the Netherlands last year, a senior Turkish official told CNN. Belgian authorities had responded that he had a criminal record but that they could not determine any link to a terrorism, the official said. In the absence of an extradition request or an Interpol notice, an EU citizen can be returned anywhere within the region.

A Netherlands Security and Justice Ministry spokeswoman could not confirm Bakraoui’s extradition and said Dutch officials are investigating the matter.

Interpol has a red notice for Laachraoui, saying he is wanted for association with terrorists and the engineering of explosives.

It’s unclear when the notice was posted.

A senior Belgian counterterrorism official has told CNN that investigators believe Salah Abdeslam likely planned to be part of an attack orchestrated by the same ISIS cell that carried out the Brussels attacks.

Abdeslam, who has been identified as the lone surviving member of the core group of eight militants who carried out November’s Paris attacks, was arrested last week in Brussels.

Khalid El Bakraoui had used false identity papers to rent the apartment in the Forest district of Brussels which Abdeslam used as a safehouse in the wake of the Paris attacks until it was discovered by police last week — a link that definitively tied the Paris and Brussels cells, the official said.

Investigators believe the cell accelerated the plan when Abdeslam was captured, the official said.

The will of Ibrahim El Bakraoui, found by investigators in the wake of the attacks, had expressed a concern that if he took “too long, he will end up with him in jail,” Van Leeuw said Wednesday.

A taxi driver who took the three suspects to the airport told investigators that he picked them up at an address in Max Roos Street in the Brussels district of Schaerbeek, prompting a raid on an address there Tuesday that uncovered 15 kilograms of the explosive TATP, chemicals, a suitcase with nails and screws, an ISIS flag and other equipment meant to make explosives, Van Leeuw said.

Police searched two other addresses on the street and found nothing, but then found a computer containing the will of Ibrahim El Bakraoui in a trash can on the street, Van Leeuw said. The statement said he was “in a rush,” “not knowing what to do,” “being actively sought everywhere” and “not feeling safe,” the prosecutor said.

He said that police had arrested two people — one in Schaerbeek, who was still being interrogated, and another who had been released after questioning.

Police raids have continued in the Brussels area, and one on Wednesday in Anderlecht resulted in the arrest of an individual whose identity has not yet been released.

The first victim to be identified is Adelma Marina Tapia Ruiz, who was killed in the attack at the airport, according to Peruvian state news agency Andina.

Originally from Peru, Tapia Ruiz had lived in Belgium for six years and was at the airport with her husband and twin 3-year-old daughters waiting to board a plane when the bombs went off.

Belgian law student Leopold Hecht was killed at the metro station in the Brussels attack, his school, Universite Saint-Louis Bruxelles, said in a statement.

And Olivier Delespesse was killed in the metro explosion, said his employer, La Federation Wallonie-Bruxelles, a government ministry serving Francophone Brussels and Wallonia.

A U.S. State Department spokesman said Wednesday that about a dozen Americans were injured in the attacks, but “we are not aware of any U.S. citizen deaths.” The statement, from spokesman Mark Toner, added, “We must emphasize that a number of U.S. citizens remain unaccounted for and the Kingdom of Belgium has not yet released nationality information for reported fatalities.”

“The Belgians have been sitting on a ticking time bomb,” one U.S. counterterrorism official said.

U.S. intelligence officials say they weren’t surprised that Brussels was attacked, because there have been general concerns about terror threats, particularly after recent raids and the arrest of Abdeslam last week.

Belgium has been a top concern for counterterrorism officials for years because of the large number of Belgian foreign fighters who have traveled to join ISIS and other terror groups in Syria and Iraq — more per capita than any other European Union country.

Many have been returning.

Last Friday, after more than four months on the run, Abdeslam was captured after being wounded in a gunfight with Belgian police in Molenbeek. Days later, Belgium and French authorities warned of more attacks.