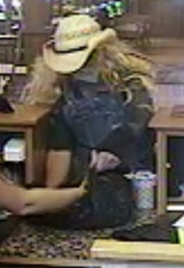 SALT LAKE CITY — The FBI is asking for the public’s help in identifying a suspect or suspects wanted in connection with a string of bank robberies that have occurred in Salt Lake and Utah counties in recent months.

Police are not sure if there are multiple suspects or just one man, as the images from each bank shows a suspect wearing some kind of disguise. Police provided a list of the alleged crimes as well as a variety of photos.

A Central Bank, 182 Main Street in Payson, was robbed August 14, 2015. The suspect appears to be wearing a long wig, a hat and a bandanna over his face. He was seen getting into a late 90s model Chevrolet Trailblazer.

An American West Bank, 1534 South State Street in Orem, was robbed September 24, 2015. The suspect had what appeared to be a white bandage on his left forearm and a noticeable scar on his right elbow. In this robbery the man was wearing a red bandanna over his head, dark sunglasses and what appears to be a false beard.

A Key Bank, 4025 South Wasatch Boulevard in Salt Lake City, was robbed November 6, 2015. The suspect in that crime was wearing a black hoodie, black sunglasses and had a prominent black mustache, which is possibly a fake.

A Chase Bank, 8950 South 1300 East in Sandy, was robbed December 15, 2015. The suspect in that crime was wearing a plaid shirt or jacket over a dark hoodie. He had on sunglasses and brown pants.

A Capital Community Bank was robbed January 7, 2016. Police did not provide an address for that robbery, but said the suspect fled on a bike after the teller gave him numerous $2 bills. The suspect in that crime was wearing a blue and white winter coat, a blue hat, a black face mask and sunglasses.

A US Bank, 1220 South State Street in Orem, was robbed February 29, 2016. The suspect in that case was wearing a black jacket, black sunglasses and had a mustache.

A Mountain America Credit Union, 839 West State Road in American Fork, was robbed March 15, 2016. The suspect was seen removing his hat outside of the bank and appeared to have graying hair and is believed to be in his mid-40s. The suspect was wearing a blue or purple jacket, a black face mask and sunglasses.

Anyone who recognizes the suspect or suspects or who has knowledge of the alleged crimes is asked to contact their local police department or the Salt Lake City Division of the FBI.