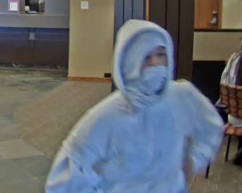 TAYLORSVILLE, Utah — Police are seeking the public’s help in locating a suspect in a credit union robbery who allegedly threatened to kill everyone if his or her demands were not met.

According to a press release from the Unified Police Department, the robbery occurred March 17 at a Mountain America Credit Union located at 2627 West 4700 South in Taylorsville.

The suspect threatened to kill everyone if those inside did not comply with their demands, and the suspect kept a hand inside the front pocket of their shirt to make employee’s believe the suspect had a weapon.

The suspect fled after receiving and undisclosed amount of money. They are described as being 5-feet, 2-inches tall and weighing 130 pounds. Police did not specify the suspect’s gender or provide any further descriptions, though the suspect is pictured above.

The suspect may be traveling in a white Dodge truck with a white shell.

Anyone who recognizes the suspect or who has knowledge of the alleged crime is asked to call UPD at 385-468-9819.