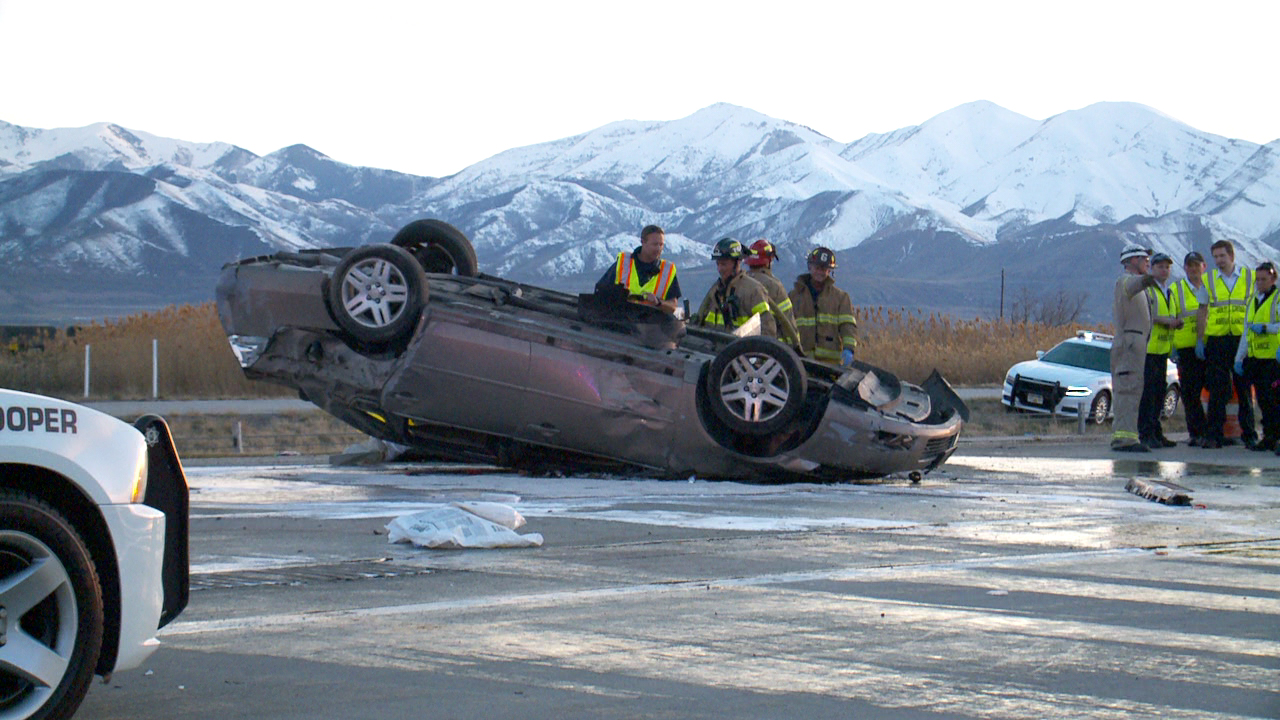 SALT LAKE CITY — Two people suffered serious to critical injuries in a rollover crash that closed westbound lanes of I-80 near 5600 West Saturday night, and the pair were fleeing from police at a high rate of speed when the crash occurred.

The crash occurred on I-80 near 5600 West around 7 p.m., and westbound lanes of the freeway were closed in the area as crews investigated. Traffic was being diverted to SR-201 at 5600 West until those lanes reopened.

“So this started with a traffic stop for a speed violation,” said Lt. Beau Mason of the Utah Highway Patrol. “This vehicle was travelling at a rate of speed much greater than the speed limit… after speaking with the occupants of the vehicle, [the trooper] was fairly certain they provided false information to him.”

Mason said the car was going in excess of 100 mph when the traffic stop was made on eastbound I-80 near 7200 West, and he said the trooper became suspicious about the names and other information the pair in the car provided.

As the trooper investigated those suspicions, the pair fled and a short chase ensued. UHP said the trooper ended the pursuit due to safety concerns, as the car was traveling at high speeds in a construction zone and passing other drivers on the right.

“Terminated the pursuit, shortly after that the vehicle lost control and rolled,” Mason said. “Both occupants were injured and were transported to local hospitals with fairly serious injuries.”

The car was traveling eastbound but rolled through the median and blocked westbound lanes. A man and woman were in the car.

The woman, later identified as 28-year-old Loan Thi Bao Do from Salt Lake City, told officers she was six months pregnant. Sunday, authorities stated the woman and her baby are reported to be in good condition.

The male driver, later identified as 27-year-old Mamadou Jadama from Salt Lake City, was listed in serious condition with a head injury Sunday.

“The male driver was pretty seriously injured, he has some critical injuries,” Mason said Saturday. “He is alive at this time, but he is in serious condition.”

Both persons were found to have warrants out for their arrests, and they could face further charges for fleeing police.

Mason said because their department was involved in the chase, the investigation into the crash has been turned over to Salt Lake City police.