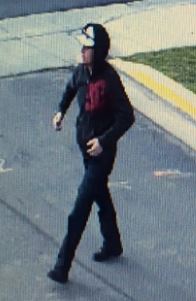 KEARNS, Utah — Police are seeking the public’s help in identifying a suspect in a pharmacy robbery in Kearns.

On March 30 at 5 p.m., a man walked into Apothecary Pharmacy, 4188 W. 5415 South, brandished a handgun to employees and demanded money and prescription drugs, according to a press release from Unified Police.

The employees complied and the suspect left the area with an undisclosed amount of cash and medications, classified as controlled substances.

The suspect was last seen driving away westbound on 5415 South in a black 1990s Chevrolet pickup truck.

Police say the suspect should be considered armed and dangerous and not to approach him if seen. Anyone with information is asked to call authorities at 385-468-9819.

The suspect is described as a man in his 20s, about 6 feet tall with a slender build.

He was last seen wearing black shoes, black pants and black hoodie. Under the hoodie, he appeared to be wearing a gray t-shirt with dark stripes.