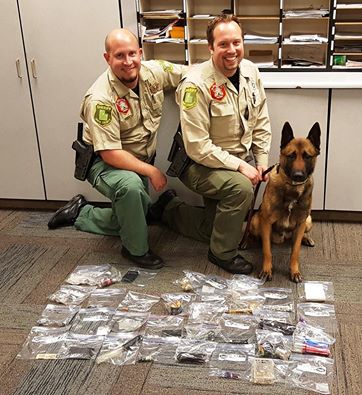 DAVIS COUNTY, Utah — Drugs and explosives found during a search of a Davis County home led to the arrest of four family members and two others.

The incident occurred Thursday night at around 8 p.m., when a Davis County Sheriff’s deputy was patrolling the south Davis County area along Highway 89 and noticed an unattended vehicle in the driveway of a home with smoke coming from under the hood, according to the sheriff’s office Facebook post.

The deputy knocked on the door and made contact with the residents. Eldon Martindale, owner of the home, does not live there, but allows his children, Brad Martindale and Lois Bodily to live at the residence.

Also living at the home are Brad’s children, Austen Martindale and Bradly Martindale.

As he was talking with the Martindales, the post states, the deputy noticed a prevalent odor of illegal substances coming from the residence.

The deputy called in a search warrant.

During the search, authorities seized more than 48 pieces of evidence, which included: methamphetamine, marijuana, cocaine, pills, paraphernalia and explosives.

The Martindales, Andersen, Bodily and Kirch were all booked into Davis County Jail on drug charges.

The sheriff’s office was assisted by Bountiful City police, North Salt Lake police and the police K-9 Rino in making the narcotics bust.