Some thoughts on my experience

SALT LAKE CITY -- Former Senator Robert Foster Bennett died Wednesday night at the age of 82, according to a post on his personal Facebook page.

The post states Senator Bob Bennett died as a result of complications from pancreatic cancer and a recent stroke.

"His final days were filled with kindness and love, and the family greatly appreciates the outpouring of well wishes and support," the post stated. "It touched his heart, and deeply touched ours, to see how much he was loved."

Bennett's son, Jim, is acting as the family's spokesman, and he confirmed the details of the Facebook post to FOX 13 News. Click here for more on Jim's comments regarding his father's life and legacy.

Bennett, a Republican, was first elected to the Senate in 1992, and he held that seat until 2010.

"Michelle and I were saddened to learn of the passing of former Senator Bob Bennett. For 18 years, Bob worked tirelessly in the United States Senate for his fellow Utahns. His commitment to his constituents transcended partisanship and he often reached across the aisle to get things done. He was a dedicated public servant and his work-- like efforts to save the country from economic collapse-- is exemplary of what we can accomplish when we put aside our differences and focus on our common goals. Michelle and I offer our deepest condolences to Bob's wife Joyce, and their children and grandchildren."

Mitt Romney posted a statement on Facebook Wednesday night, expressing his condolences and sharing his experiences with Bennett during a run for public office. He said in part: "What I will remember most about Senator Bennett is his unwavering commitment to principle; his is an example of integrity and character that will long live in the memories of all of us who knew him. God be with you, Bob, till we meet again at Jesus' feet."

Senator Orrin Hatch, who served alongside Bennett in the U.S. Senate for many years, said his colleague served with unwavering devotion and was respected as a wise and thoughtful leader.

“I had the incredible honor of serving alongside Bob Bennett for nearly two decades as we represented the State of Utah in the United States Senate. In that time, Bob served our state and the nation with unwavering devotion. In the Senate, he was widely respected as a wise and thoughtful leader committed to finding innovative solutions to the most difficult challenges of the day. Above all else, he was a passionate fighter for Utahns, whom were always foremost in his mind. Our state has benefited tremendously from his many years of loyal service. I will remember Bob not only as an admired colleague and a trusted partner, but also as a cherished friend that I will miss dearly. Elaine and I send our deepest sympathy and heartfelt prayers to Joyce and the entire Bennett family at this difficult time.”

Utah Gov. Gary Herbert stated that Bennett was a born leader who was above all a man of integrity.

“Our prayers are with the Bennett family today as we mourn the passing of former Sen. Bob Bennett. Bob was a tremendous public servant who faithfully represented our state. A born leader, his passion for public policy came early in life and guided his lifetime of service and civic involvement. I will remember Bob as someone who was always quick to take on an assignment and slow to take the credit once he accomplished it. Above all, he was a man of integrity who loved his family and the people he served. Jeanette and I extend our heartfelt condolences to his wife Joyce and their six children.”

"Julie and I mourn with our fellow Utahns at the passing of Senator Robert F. Bennett.  A political and intellectual heavyweight, Senator Bennett was a model for pragmatism who knew how to get things done. His life and his heritage were a legacy of service. Senator Bennett’s economic and political contributions to the state of Utah will continue to be felt long after his passing."

Utah Rep. Bob Bishop said he was impressed by the senator's insight and compassion for all Utahns.

“As much as we mourn his loss, it is comforting to realize he is continuing his eternal progression. Senator Bennett was not just a wise political leader for the state, he was someone I considered a friend. I first met Bob Bennett well before he was elected, as we worked to improve Utah’s education structure. Since then, I have worked with him in many capacities, and was impressed by his keen insight and compassion for all Utahns. He had great political stories, which I hope he has written down. His family is in my prayers and hopefully they take comfort in knowing their father and husband left this world a better place than he found it.”

Utah Democratic Party Chairman Peter Corroon said Bennett was someone who was willing to work across the political aisle.

“Bob Bennett was an intelligent, collaborative senator who was willing to work across the political aisle in the best interest of Utahns. He always had a warm welcome and a piece of history to share when I had the good fortune of meeting with him. He will be sorely missed. Our thoughts and prayers are with his family.”

“I was privileged to know Senator Bennett for many years. Whenever we talked, it didn’t matter that I was a Democrat; what mattered was that I was a Utahn. We shared a love of politics, art and Shakespeare. Last summer I fondly recall discussing plays with him at the Utah Shakespeare Festival. During the past few years every time I saw him, he would remind me that he worked at a law firm in DC founded by my uncle. Senator Bennett was a strong supporter of Israel, a topic that brought us together.

I may have not always agreed with his views on policy issues, but I always appreciated his civility. In this political climate that might seem like a weakness, but that is what Utah and our nation so desperately need. We have lost a leader in Utah, someone who made a major contribution to our state and nation.  His presence and his politics will be missed.”

Salt Lake County Mayor Ben McAdams also tweeted a reaction, saying he was sad to hear of the passing of "A proud Utahn who gave so much to our state."

So sad to hear of Sen. Bob Bennett's passing. A proud Utahn who gave so much to our state. #SenBobBennett pic.twitter.com/sFMK7qyj1R 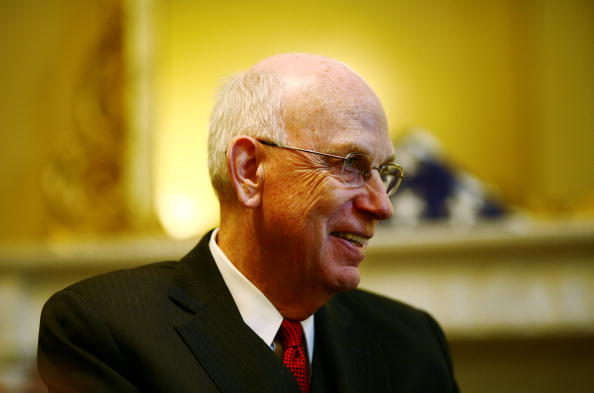