Amber Alert: Girl taken by uncle may be in Idaho 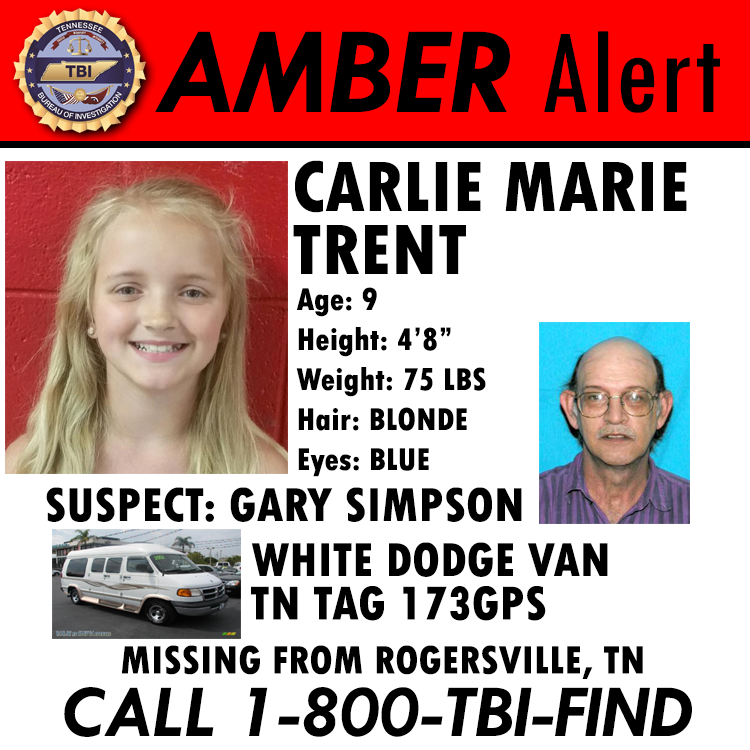 ROGERSVILLE, Tenn. — Authorities are searching for a 9-year-old girl taken from school by an uncle with no custodial rights, according to a news release from the Tennessee Bureau of Investigation.

Authorities said they have reason to believe they may be headed to the southern Idaho area, possibly Idaho Falls.

An Amber Alert was issued for middle and east Tennessee on behalf of the Rogersville Police Department on Thursday.

A kidnapping warrant has been issued against 57-year-old Gary Simpson, the release said.

He is an uncle by marriage to Carlie Marie Trent, whom he allegedly removed from school last Wednesday under false pretenses, the release said.

Tips not panning out

Carlie is a white female, 4-feet 8-inches tall, weighs 75 pounds and has blonde hair and blue eyes. She was last seen wearing a black and gray tank top and blue jeans.

Simpson is a white male, 5-feet 10 inches tall and weighing 157 pounds. He is balding and has brown hair and eyes.

He was last seen wearing a brown cap, a dark-colored shirt and jeans and driving a white 2002 Dodge conversion van with Tennessee registration 173GPS.

The van has a dark stripe down the middle with light gold running boards and paint chipping off of the hood.

There have been no confirmed sightings of Simpson, Trent or the van, according to Josh DeVine, a spokesman for the TBI.

Authorities have received over 500 tips so far, none of which have panned out, DeVine said.

But authorities believe they just need one to bust open the case.

“We really believe in the power of one tip to completely turn this entire story around,” he said.

DeVine also issued a plea to Simpson on behalf of authorities and Trent’s family.

“You’re family is eager to hear from you, and your family is eager and anxious to have Carlie home. We would encourage you, Gary, to do the right thing and bring Carlie home,” DeVine said. “There is nothing that you’ve done that can’t be fixed.”

The U.S. Marshals have increased their reward to $5,000 for information leading to Trent’s safe recovery and Simpson’s arrest.

Authorities say anybody with information should contact the Rogersville Police Department at 423-272-7555 or TBI at 1-800-TBI-FIND.