COTTONWOOD HEIGHTS, Utah — Two men have been arrested in connection with the death of a man whose body was found in the parking lot of a credit union in Cottonwood Heights last week.

A woman is also wanted for questioning.

Police said Mauricio Martinez, 31, had been shot multiple times before he was found dead in a car at Mountain America Credit Union near 3000 E. and 6485 S. at about 7 a.m. Friday.

Marco Antonio A. Garcia, 26, and Jorge Arturo Castanon-Serrano, 34, were both booked into the Salt Lake County Metro Jail on Sunday in connection with the murder. Both men are facing first-degree felony charges of aggravated murder and aggravated robbery.

Police are also looking for Jamie Clarissa George, 34. She is wanted for questioning in the apparent homicide, according to authorities.

George is described as 120 pounds, slim build, with hazel eyes and blonde hair. Anyone who knows of her whereabouts is asked to call police at 801-799-3000.

Castanon-Serrano is also facing misdemeanor charges of driving without a license, speeding and failure to appear in court.

According to probable cause statements, both men admitted to setting up a robbery of Martinez and another man at a location in Salt Lake City. Detective Greg Wilking of the Salt Lake City Police Department said police believe the robbery and murder occurred Thursday at a home on Redwood Rd. in Salt Lake City.

Martinez was shot and killed during the robbery.

Police said a witness identified both Garcia and Castanon-Serrano as being involved in the murder and at least one more arrest is likely. 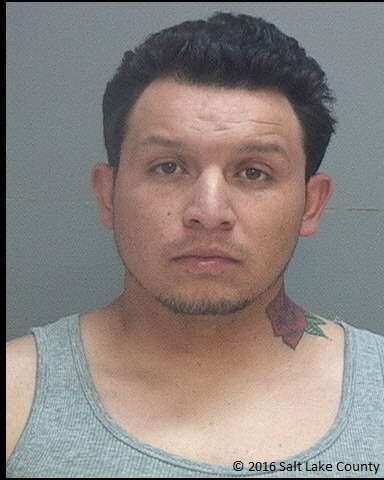