Fire officials plan to meet with the public on Saturday, June 25 at 10 a.m. at the Central Fire Station to give updates, and discuss what happens from here.

The flames are putting more families on high alert, but at least one group is staying put.

The family has been planning a reunion for six years, and with branches of the family from multiple states all in Pine Valley for the occasion, they don't plan to budge until they absolutely have to.

"Last night watching it come down the mountain, that was ominous looking," she said. "It wasn't quite front row seating, but, yeah, it was kind of scary."

Officials said at this point evacuations are not mandatory, but strongly encouraged. Crews continue to attack the fire from the air while ground crews set up fuel breaks in hopes of confining the fire to the mountain. Fire officials said their efforts may go on for the foreseeable future.

"This is an area that's gonna have, you know, smoke for a while," Christian Venhuizen, the PIO for the Saddle Fire, said.

"Each reunion you have like, something that went on that year, it's like, 'Oh, yeah! Remember the fire reunion year?!'"

Flames entered the canyon despite aerial firefighting efforts to suppress a spot fire that burned just east of Lloyds Canyon.

Fire crews said at least 500 homes are threatened at this time. 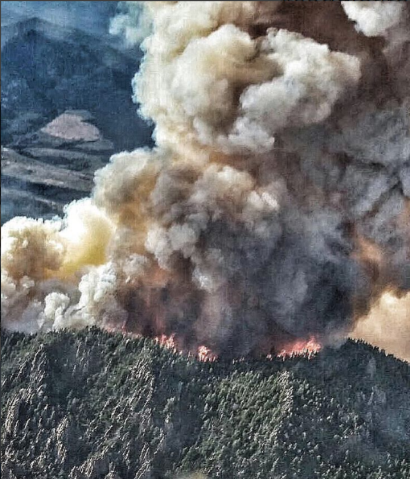 Fire Background: Started by a lightning strike, June 13, 2016, approximately 2.5 miles southwest from the town of Pine Valley in the Pine Valley Mountain Wilderness of the Dixie National Forest

Evacuations: Washington County Sheriffs Office has issued a voluntary evacuation order for the town of Pine Valley. Property owners are encouraged to prepare to evacuate if conditions change.

Injuries: No injuries have been reported.

It's a little too close to Pine Valley. Photo by Heather Lewis #SaddleFire #UtahFire pic.twitter.com/QzJnyD2Qv1