10 injured after roller coaster derails at theme park in Scotland 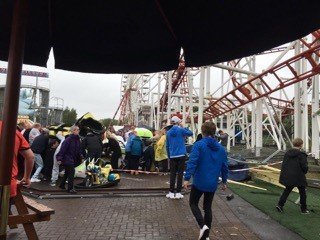 (CNN) — Ten people were injured when a roller coaster car derailed at a theme park in Scotland on Sunday afternoon.

In a post on Facebook, Lanarkshire Police said two adults and eight children were being treated at local hospitals.

“The details of their injuries will be provided in due course,” police said.

The incident occurred on the “Tsunami” roller coaster when five gondolas detached from their rails, collided with the ride’s main structure and struck the ground, police said. Nine passengers were on the ride, police said.

The Tsunami can travel at speeds of up to 40 miles per hour, according to the park’s website. Children under 10 are not permitted to ride, the park says.

James Millerick from Glasgow, who said he had rode the Tsunami just a few minutes before the derailment, described hearing a crash and screams as he waited in line for another ride with his partner.

Millerick said he was shaken after witnessing a number of people trapped in the derailed car after the crash.

In a statement, M&D’s said the park would be closed until further notice due to a “serious incident.”

“Our thoughts are with the families of those injured,” said Chief Inspector David Bruce of the Lanarkshire Police. A investigation is now underway, he said.