West Virginia flooding: Residents can return to homes, if they’re still there 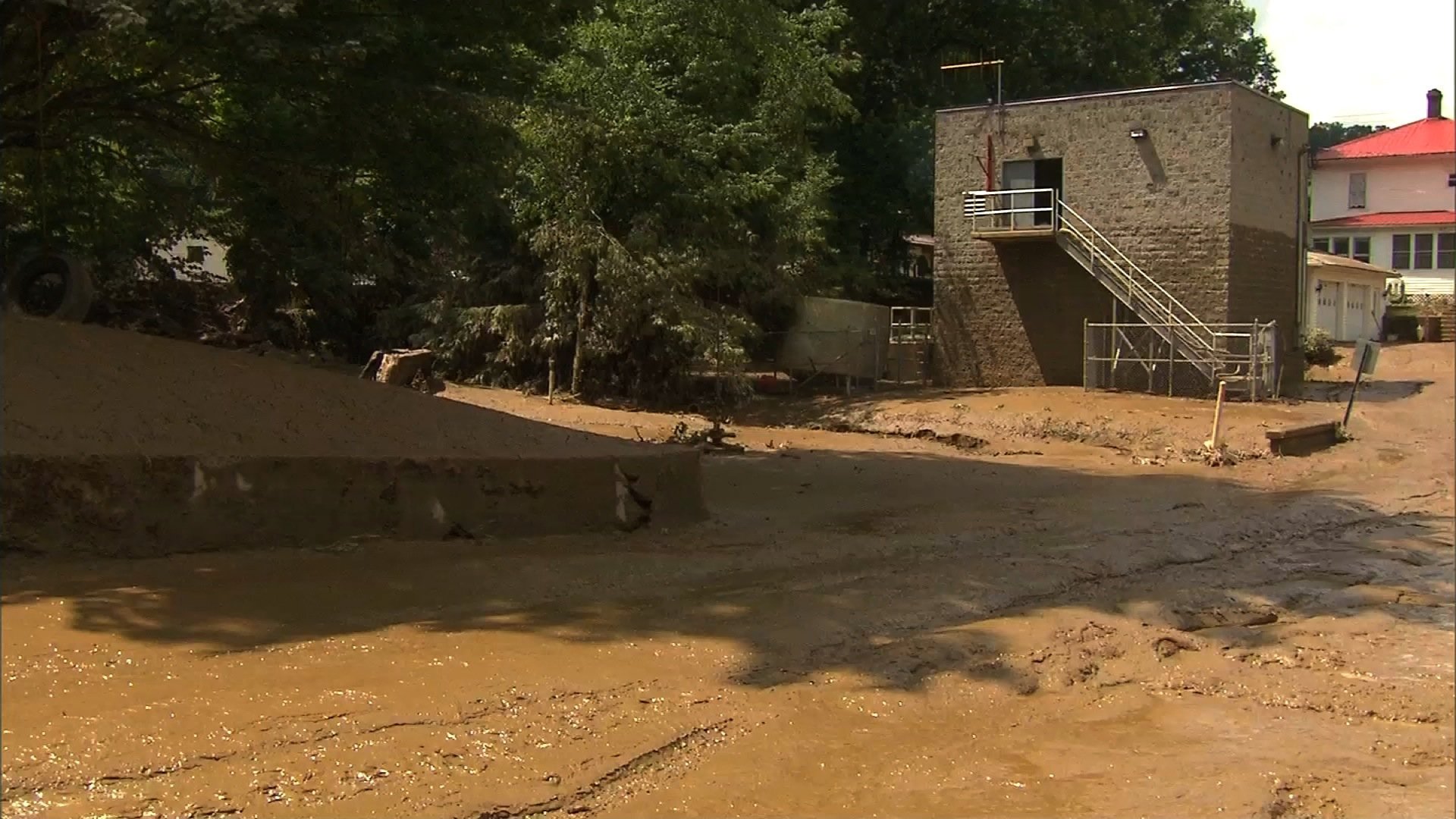 (CNN) — The floodwaters are receding in parts of West Virginia, and although Sunday’s weather boded well for a region hammered by the nation’s worst flash flooding in years, some have found coming home as jarring as being evacuated.

The state is bracing for more flooding. The National Weather Service has issued a flash flood watch for most of West Virginia on Monday, from morning to evening. Showers and thunderstorms are expected as a cold front slowly approaches from the northwest. Heavy rain combined with saturated soil could cause additional flooding, the weather service said.

Clendenin was one of the towns hardest hit by the flooding that has killed 24 people. Thick, slippery mud coated streets in the town of 1,200 residents, located about 30 miles northeast of the state capital, Charleston.

Flash flooding washed a pickup truck into a bog, inundated homes and businesses and pushed a Dairy Queen right out from under its awning, one end of which sat Sunday on the knee-high parking barriers in the burger joint’s parking lot.

Teresa Candler was allowed to return to her home Saturday, or what was left of it. Rooms in the house had been ripped apart, the refrigerator was flipped over and furniture had been tossed about the living room, according to CNN affiliate WSAZ.

Candler and relatives tried to salvage what they could, but even her family photos were covered in mud. Her daughter estimated it could take months to clean up.

“It’s devastating,” Candler told the station. “The last time I looked out I saw the roof of my house and that’s all I’ve seen and it was gone.”

Residents may have to move

David Ross, whose family was forced to haul its valuables upstairs when floodwaters filled the home, said it’s the worst flooding he’d seen in the state in almost four decades.

“We ran out of time,” Ross told CNN on Saturday. “We couldn’t get everything up, and when the water started coming into the house, it didn’t stop until we had almost four feet of water on my main floor, and it’s never been that way.”

U.S. Sen. Joe Manchin told CNN he has spent his entire life in West Virginia and he’d never seen water rise this high so quickly. The priority now, he said, is locating the missing, restoring power and infrastructure, and making certain those in need of help receive it.

But some of those residents accepting federal assistance may be forced to relocate.

“To get assistance they’re gonna have to move out. They can’t rebuild back or be in the same area where it could happen again,” he said,

“When you get this much water, to hit for this long and this hard, for over a day, day and a half, two days, nothing can handle this. It’s got to go somewhere, but we’ve never seen anything hit this hard and this quick. So yeah, you have to look and see what do we do now, how do we move people around, make sure it doesn’t happen again, or protect them.”

Power out till Monday

As of early Sunday, roughly 17,300 customers remained without electricity, the state said. Appalachian Power, which serves the Charleston area, must make repairs to its infrastructure before it can restore power to residents.

In Clay County, a substation was flooded and its access road was destroyed, and in Kanawha County, where Clendenin is located, the substation was submerged. The county has set up water distribution sites at a fire station and elementary school.

“Workers are in the process of transporting and installing a mobile transformer this evening and into tomorrow,” the utility said. It is expected to be energized by Sunday evening, which will allow power to be restored to most customers in that area by Monday night.

Rescue crews worked Saturday to answer emergency calls from residents stranded by the fast-moving floodwaters. It’s the nation’s highest death toll from flash floods since May 2010, when 27 people died in Tennessee, Kentucky and Mississippi.

The West Virginia Division of Homeland Security and Emergency Management has reported 24 deaths: 16 in Greenbrier County, six in Kanawha County and one each in Jackson and Ohio counties.

Heavy rain battered much of West Virginia earlier this week, with as much as 10 inches of rain falling in a brief period Thursday.

Water poured out of creeks and rivers. The Elk River, which runs alongside Clendenin, crested at 33.37 feet Friday morning, meteorologists said.

The river rose more than 27 feet from Thursday afternoon to Friday morning, the highest crest since record-keeping began more than 125 years ago, according to the National Weather Service.

A handful of people converged on the steps of the state Capitol on Saturday evening, writing messages for family and friends and lighting candles for those lost in the flooding, reported CNN affiliate WVAH. They ended by singing John Denver’s “Take Me Home, Country Roads,” the station said.

The cities of Frame and Elkview in Kanawha County suffered significant damage. Nearly 500 people were stranded at the Elkview Crossings Mall for more than 24 hours when rain washed out an access road, officials said.

Tomblin has called in 300 National Guard members to assist in eight counties and has authorization to activate as many as 200 more.

Among the areas still reeling from the storms are Roane County, where 500 homes were severely damaged or destroyed, Fayette County, which doesn’t anticipate being able to repair its water system until Monday or Tuesday; and Kanawha County, which is continuing its search-and-rescue operations as 90 displaced residents live in temporary shelter.

The governor declared states of emergency in 44 counties. Eleven remaining counties, located in the northern and eastern panhandles, were excluded from the emergency declaration.

Social media pages for the state emergency management agency directed those affected by the flood to various Federal Emergency Management Agency links for assistance and provided tips on tree and debris removal.

The state Department of Environmental Protection is also working to assist with debris removal by extending landfill hours in affected counties. And the West Virginia Department of Health and Human Resources is coordinating the delivery of tetanus vaccinations to several counties early this week.

‘My apartment is gone’

At least two children were killed in the deluge, including a 4-year-old boy who was washed away by floodwaters in Jackson County, officials said.

Chad Agner, 26, said he saw homes and cars swept away in White Sulphur Springs, in the southeastern part of the state.

Others saw a home that burned as it floated down Howard’s Creek, having been washed away by floodwaters in the same Greenbrier County town.

“The house in front of where my apartment used to be is turned over. Some houses are totally gone,” Agner told CNN. “My apartment is gone.”

Also in White Sulphur Springs, the storms severely impacted The Greenbrier, a luxury resort that was scheduled to host the PGA Tour’s Greenbrier Classic July 7-10.

The PGA canceled the tournament Saturday because of heavy damage to the resort’s golf course. Greenbrier owner Jim Justice released a statement saying that their focus is on helping the people, not “the property, the golf course, or anything else.”