PINE VALLEY, Utah – The Saddle fire gained 95 acres and is now at 1,329 acres with five percent containment Monday, according to Utah fire officials.

Sunday  firefighters directly attacked the western portion of the fire.

Firefighters are now using aerial ignition operations to check the fire on the southeast side on the main ridge on the west of the avalanche chute in Forsyth Canyon.

Air tankers and heavy helicopters used thousands of gallons of retardant and water to prevent the fire from moving onto the southern face of Saddle Mountain.

There are 675 firefighters and supporting resources assigned to the incident, fighting the fire day and night.

While day crews improve fuel breaks and scout the terrain, night crews, including engines and hotshot crews patrol areas threatened by the fire, prepared to pick up spot fires and encroaching flames if needed.

The fire remains most active in the Lloyd and Forsyth canyons, burning mostly in the downed logs and underbrush in the conifer stands.

Backing fires have advanced the perimeter a little closer to the fuel breaks around Pine Valley.

Fire growth will continue to the east, northeast and southeast in Lloyd Canyon with limited spread to the northwest and west.

Areas with live, green oak and mahogany are limiting the spread of the fire.

Property owners are still asked by the Washington County Sheriff’s Office to voluntarily evacuate Pine Valley, limiting the number of people in the area threatened by fire.

Those that do not own property in Pine Valley are asked to stay clear of the area.

The Pine Valley Recreation Area in the Dixie National Forest remains under an area closure to all uses until the order is rescinded (http://inciweb.nwcg.gov/incident/article/4794/31098/).

The Saddle Fire began June 13 with a lighting strike on Saddle Mountain in the Pine Valley Mountain Wilderness of the Dixie National Forest.

It is burning in heavy, dead and downed timber and brush and in the higher elevation by very steep, inaccessible, rocky terrain. 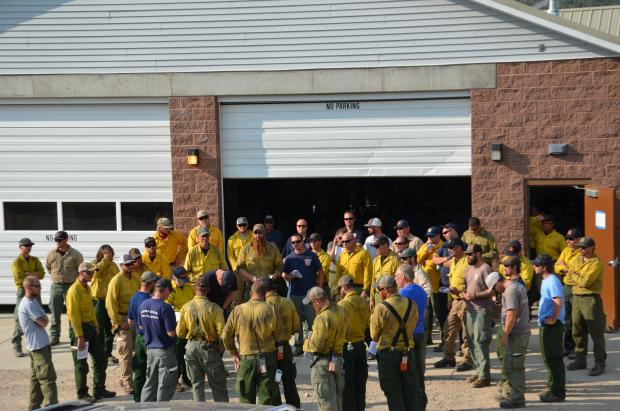