Of the three suicide bombers in the Istanbul airport attack, two of them were at the international terminal, and the third terrorist was in the nearby parking lot, a Turkish official tells CNN. All three detonated suicide vests.

Gunshots, screams and explosions pierced the air Tuesday at Istanbul Ataturk Airport, as three terrorists armed with bombs and guns attacked passengers at one of the world’s busiest travel spots.

Witnesses described deadly carnage and crowds in a panic as the attackers struck.

At least 36 people were killed, Turkish Prime Minister Binali Yildirim said, in the terror attack, one for which there was no immediate claim of responsibility.

Sue Savage was in the airport to see a friend off when she heard gunshots and then an explosion, which she knew was a bomb. Then more gunshots and another boom, she told “Erin Burnett OutFront.” 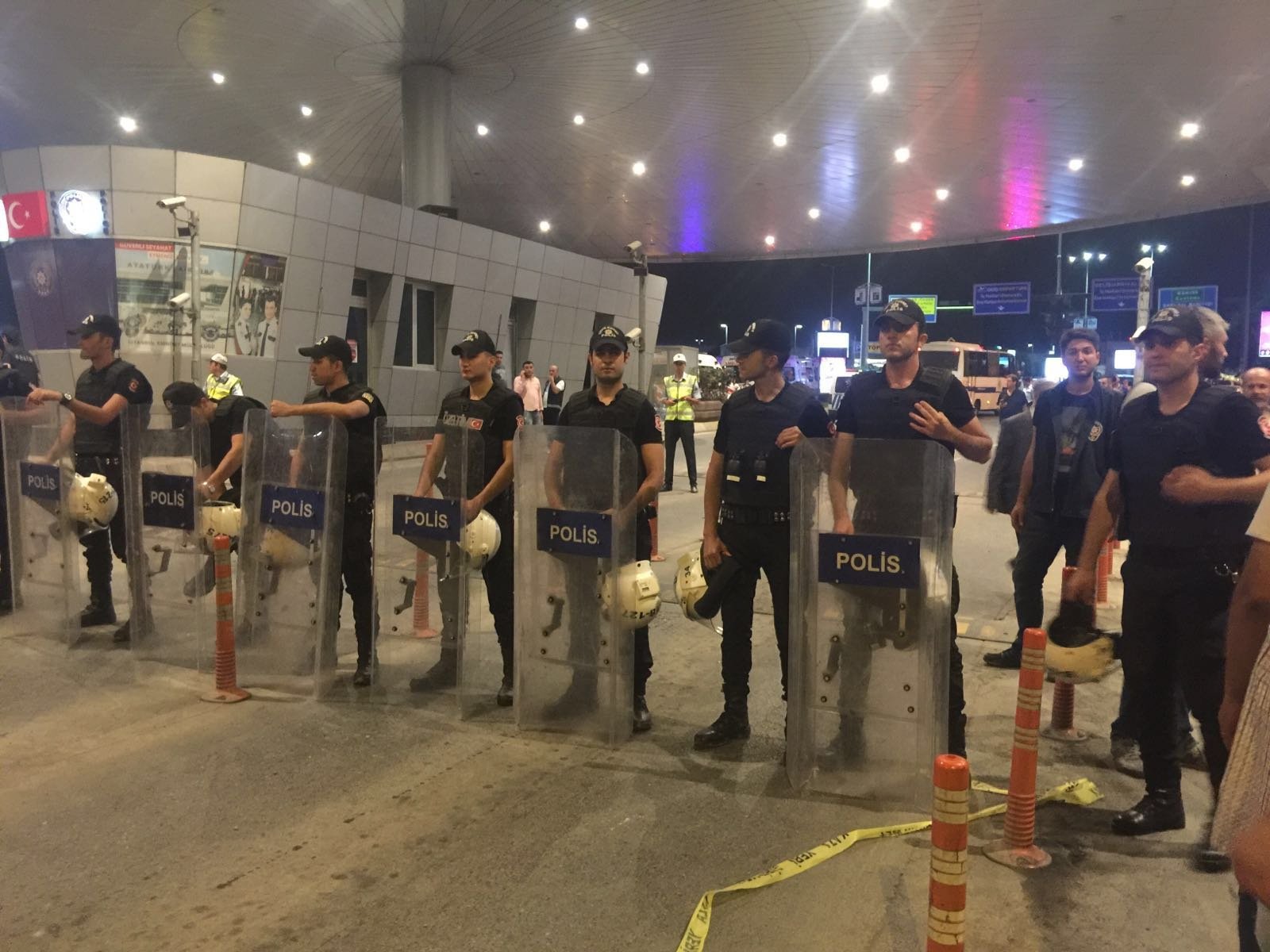 She ducked into a men’s prayer room and then into a men’s toilet, where she hid in a stall with a young woman. They came out, perhaps 20 or 30 minutes later, and heard more screams and gunshots and ducked into a room where luggage is inspected.

She and about 30 people were herded into a women’s prayer room until authorities led them out and down an escalator into the main terminal hall.

“There was a lot of blood,” she said. The floor was marked with bloody boot marks and she saw a woman’s scarf on the floor. The group was herded around to the other side of the room.

“There was so much glass on the floor they were scuffing it aside so we didn’t slip,” she said.

“It was just a massive crowd of screaming people. Some were falling over themselves. A poor chap in a wheelchair was just left, and everyone just rushed to the back of the building, and then people ran the other way and no one really seemed to know what was going on…” ~Laurence Cameron, traveler

Video from inside the airport terminal shows people racing away as fast as they could and the bright orange flash of fire from one of the explosions. Victims stagger and some fall from the now blood-covered, slick floor.

Another video shows a man walking with a gun, which he drops when he apparently is shot by a security officer. The man slumps to the ground and the officer briefly stands over him before running. About 10 seconds later, there is an explosion.

Traveler Laurence Cameron described what he saw after he stepped off a plane.

“Make no mistake: For terrorist organizations, there is no difference between Istanbul and London, Ankara and Berlin, Izmir and Chicago or Antalya and Rome…” ~Turkish President Recep Tayyip Erdogan

“It was just a massive crowd of screaming people. Some were falling over themselves. A poor chap in a wheelchair was just left, and everyone just rushed to the back of the building, and then people ran the other way and no one really seemed to know what was going on,” he told CNN. “Where you normally hail a taxi, that is where the attack happened. The ground is just kind of shredded. There are bloodstains on the floor as well.”

Turkish President Recep Tayyip Erdogan called for a unified international fight against terrorism, saying: “Make no mistake: For terrorist organizations, there is no difference between Istanbul and London, Ankara and Berlin, Izmir and Chicago or Antalya and Rome. Unless all governments and the entire mankind join forces in the fight against terrorism, much worse things than what we fear to imagine today will come true.”

The attacks happened on a warm summer night at the airport, east of Istanbul, which is the 11th busiest in the world in terms of passenger traffic. CNN’s Ali Veshi said Ataturk is a modern, sophisticated airport.

“There are all of the major European and American boutiques there,” said Velshi, who has traveled through Turkey many times. “… You see people of all shapes and colors, in all sorts of dress. If you want to target the cosmopolitan nature of Istanbul, this is possibly the most cosmopolitan, heavily populated part. You can target tourist areas, but this is the part where the world comes together.”

Flights into the airport were diverted to the capital of Ankara and other cities, airport spokesman Erhan Ustundag said.

“…Unless all governments and the entire mankind join forces in the fight against terrorism, much worse things than what we fear to imagine today will come true.” ~Turkish President Recep Tayyip Erdogan

“The terrorists came to the airport in a taxi and then carried out their attacks,” Yildirim told a national audience. “The fact that they were carrying guns added to the toll. Preliminary findings suggest all three attackers first opened fire then detonated themselves.”

Yildirim didn’t say why, but said signs pointed to ISIS being behind the attacks, which occurred with a little more than a week left in the Muslim holy month of Ramadan.

Multiple U.S. officials told CNN’s Pamela Brown and Elise Labott that the early thinking among U.S. intelligence officials was that ISIS or an ISIS-inspired group was to blame. Like the Turkish prime minister, the officials said there is much more investigating to be done.

One official said the attack bears the hallmarks of ISIS because of the target and the method. And a senior US official pointed to the way it was coordinated using weapons and explosions.

It would be a “big surprise” if it was the PKK — or Kurdistan Worker’s Party — based on how the attack was conducted. The PKK tends to target military and security installations, other officials said.

Turkey has been rocked by a string of terror attacks over the past year as it weathers bombing campaigns carried out both by ISIS and Kurdish militants.

As part of the U.S.-led coalition against ISIS, Turkey allows coalition planes to fly raids on ISIS targets in neighboring Iraq and Syria from its territory.

And last year Turkey resumed hostilities with the PKK, Kurdish militant separatists, in earnest after a two-year cease fire broke down.

The PKK has been in an armed struggle with the Turkish government for decades and is considered a terror group by Turkey, the United States and the European Union.

In March, at least 37 were killed when a car bomb detonated near a bus stop in the Turkish capital, Ankara, in an attack claimed by a Kurdish militant group.

A month earlier, 28 were killed in a blast targeting military vehicles in central Ankara. A Kurdish group claimed responsibility.

And in January, at least 10 German tourists died in a suicide bombing in Istanbul’s Sultanahmet Square that Turkish authorities linked to ISIS.

The violence has had an impact on Turkey’s tourism industry, a key sector of the national economy.

Ataturk Airport is “one of the most secure airports in the world,” CNN senior law enforcement analyst Tom Fuentes says. But the airport has been “very overwhelmed for several decades with terrorism from PKK.”

U.S. Secretary of State John Kerry, referencing the terror attack, told an audience at the Aspen Ideas Festival on Tuesday, “We are still collecting information and trying to ascertain what happened and who did it.”

The White House issued a statement condemning the terror act.

“Ataturk International Airport, like Brussels Airport which was attacked earlier this year, is a symbol of international connections and the ties that bind us together. Our deepest condolences go out to the families and loved ones of those killed, and we wish a speedy recovery to those injured. We remain steadfast in our support for Turkey, our NATO ally and partner, along with all of our friends and allies around the world, as we continue to confront the threat of terrorism.”

The U.S. Embassy in Ankara sent consular officers to the airport to see whether any of the victims were from the United States. There were no immediate indications of any American casualties, a senior State Department official told CNN.