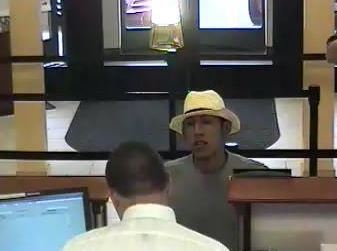 The last robbery the man is suspected to be involved in occurred on Aug. 15 in Taylorsville, according to a press release from Unified police.

At 12:24 p.m., the release states, the suspect walked into a Wells Fargo, approached a teller and presented a note that indicated he had a gun and demanded money.

The teller gave him an undisclosed amount of money and the suspect fled on foot. No car was seen, the release states.

No one was injured during the robbery.

The suspect is described as a Hispanic man in his mid-20s. He’s about 5 feet 4 inches tall with a thin build.

During the Taylorsville robbery, he was wearing a long-sleeve gray shirt, black pants, black shoes and a tan fedora style hat.

Anyone with information about the suspect’s identity is asked to call UPD Violent Crimes Unit at 385-468-9819.