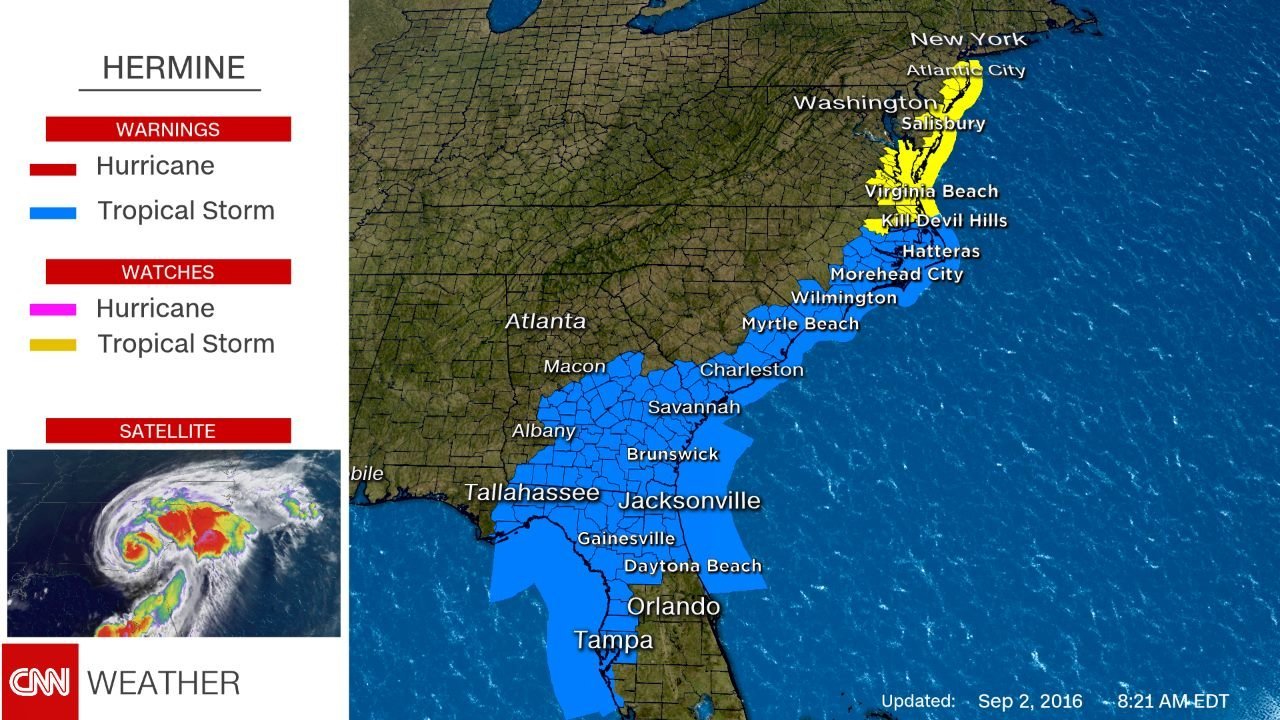 (CNN) — Tropical Storm Hermine drenched the Carolinas as it churned toward the East Coast, knocking down trees and causing blackouts as the holiday weekend kicked off.

The path of the storm, which smashed into Florida’s Panhandle as a Category 1 hurricane Friday, is projected to move through the North Carolina coast overnight and head into the Atlantic Ocean on Saturday.

Along with the storm’s destruction, Labor Day weekend worries included rough seas, dangerous surf and strong storm surge up the coast as far north as Connecticut.

As a result, no swimming will be allowed on New York beaches Sunday, and Mayor Bill De Blasio said the city is considering closing them Monday and Tuesday, too.

“We’ll see how the storm develops. People can walk on the beach and be on the sand, just not in the water,” he said.

Hermine ripped into St. Marks in Florida’s Big Bend region as a Category 1 storm just before 2 a.m. Friday, becoming the first hurricane to come ashore in the state since Wilma struck 11 years ago.

The storm’s outer bands may have killed at least one person. John Mayes, 56, was sleeping in a tent behind a gas station in Ocala, about 65 miles northwest of Orlando, when a tree fell onto him Thursday night, the Marion County Sheriff’s Office said.

A medical examiner’s office has yet to determine whether the storm was the cause, Florida Gov. Rick Scott said.

Tropical storm watches and warnings were declared along the East Coast, from South Carolina to Connecticut.

“I don’t want folks to take the weakening of the winds to mean the hazards have gone away,” hurricane center Director Rick Knabb told CNN’s New Day. “The most frequent cause of loss of life (from tropical cyclones in recent decades) is from inland flooding due to heavy rainfall.”

It is also possible Hermine will gain strength once it reaches the warm water in the Atlantic — but the characteristics of the storm will change from tropical to post-tropical.

So while it might not be called a hurricane, it could still be a very dangerous system.

‘It is a chilling map’

In Panama City, a popular Labor Day destination, organizers canceled one of the major tourist draws, the Gulf Coast Jam. Officials said the stage for the three-day country music event had to be taken down as the winds picked up.

Maryland Gov. Larry Hogan declared a state of emergency for 12 counties along the Eastern Shore and Southern Maryland.

Virginia Gov. Terry McAuliffe warned Friday that people faced a strong possibility of “life-threatening” storm surges in coastal areas over the weekend. The governor was briefed by hurricane center officials, who showed him a map with storm surge projections.

“It is a chilling map in that it shows storm surges going all the way up the Chesapeake Bay,” McAuliffe said. “We have been told of a very strong likelihood of a life-threatening storm.”